What’s in a drop of blood?

For most of human history, gleaning useful data from a substance as plentiful as people proved to be an expensive exercise that matched inefficiency with inexactness.

No more—if Punkaj Ahuja can help it.

“Blood is universal in a way few things are,” said Ahuja (CWR ’09; GRS ’11, biomedical engineering), founder and CEO of Apollo Medical Devices. “Yet, it can tell us much more—and should.”

On the promise of its portable device providing near-immediate medical information from a single blood drop, Apollo won the inaugural Morgenthaler Pavey Startup Competition (MPSC), a new university-based business pitching contest, held March 15 in front of a live audience at the Larry Sears and Sally Zlotnick Sears think[box], and co-sponsored by JumpStart, Inc. and others.

Down the road, Apollo aims for its tech to aid first-responders, militaries and in disaster-relief, while also available for at-home use by dialysis patients.

Founded in 2014, the Cleveland-based startup is trying to break into a $3 billion market that is both competitive and offers vast potential: Blood-chemistry tests are the most frequently ordered tests by physicians in the United States, according to the National Library of Medicine. But a typical test takes two hours for results.

Joining the $25,000 awarded for a first-place MPSC finish is the $1.2 million Apollo has already raised from the National Science Foundation, the National Institutes of Health, Great Lakes Innovation and Development Enterprise, and others; the prize will help pay for putting the blood tester to the test in hospital settings, to show the validity and advantages of its technology compared to the status quo—a key stepping stone in getting the device to market.

As a teenager, Ahuja was drawn to engineering’s problem-solving backbone, which he credits for instilling skills that have translated well in navigating the sometimes topsy-turvy life of an entrepreneur.

“It’s like going to business school every day, without actually having to go,” said Ahuja, of a CEO role that has him conducting research with physicians one day and meetings with executives, his employees, or investors the next.

“As an engineer, I fell in love with our technology,” he said. “As a businessperson, I am driven to get it out to the masses.” 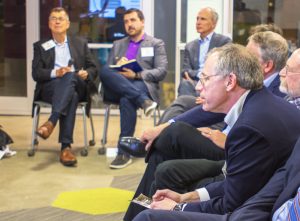 Economics professor Scott Shane (right) and a panel of professional investors, including Pavey (far left), listen to the 10-minute pitches

As a perk for its MPSC win, Apollo has been invited to work with the Case Angel Network, a new initiative started by early-stage investors who are also university alumni and faculty. The network—unaffiliated with Case Western Reserve—plans to invest directly in promising startups that include university students, graduates, faculty and supporters.

Ahuja points to this network’s recent formation as a totem telling of entrepreneurial momentum at Case Western Reserve—and notes the university’s role in a Northeast Ohio ecosystem that helped give life to an invention with worldwide potential.

“We have a support system,” he said, “that preaches and practices perseverance—a kind of universal language of entrepreneurship.”

Meanwhile, discussions are already underway for the second MPSC, which launched last fall with 29 companies—each with at least one university enrollee or recent graduate.

“This is a step closer to making Cleveland more like a San Francisco or New York,” said Scott Shane, the A. Malachi Mixon III Professor of Entrepreneurial Studies and a professor of economics at the Weatherhead School of Management.

Lending a hand in creating the new competition, Case Western Reserve trustee Bob Pavey crafted a contest similar to others he’d been a part of at Stanford University, Carnegie Mellon University and University of California, Berkeley. 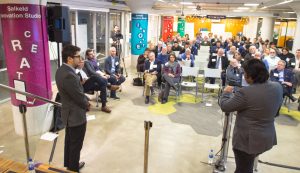 Pitching a wearable device to measure hydration, startup Inspirit was one of six MPSC finalists.

“Young people will learn as much from failing as succeeding,” said Pavey, managing partner of Pavey Investments in Cleveland and Silicon Valley, California, and partner emeritus at Cleveland-based Morgenthaler Ventures. “It’s important to have them try, and present, and learn…”

A simulcast of the six finalists’ pitches was broadcast to offices of Apartment List, a prominent startup in the Bay Area. There, investors linked with the Case Angel Network provided feedback and independently selected Apollo and ImaginAG to meet with venture capitalists at a later date.

“New companies are big sources of jobs and wealth creation,” said Shane, who coordinated the new competition founded in honor of venture capital pioneer, the late David Morgenthaler. “It’s impossible to know who will be a big winner over the long-run. Our best bet is to have a lot of people trying.”