The competition takes the novel approach of placing students on both sides of the financing process. Students will hone their venture capital skills, making initial evaluations of startup ventures as judges. Meanwhile, founding teams with at least one current or recent Case Western Reserve alumni (graduates within the last five years) are eligible to compete.

“We want a competition that creates new, viable high-potential companies coming out of Case Western Reserve University, and we want to train students to invest in these companies,” said Scott Shane, the A. Malachi Mixon III Professor of Entrepreneurial Studies and an economics professor at the Weatherhead School of Management, who is directing the new program. 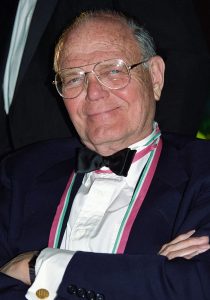 “Dave and I have always believed institutions can enhance their students’ academic and life experience by adding something new,” Pavey said. “We have taken a similar approach at a number of universities around the country, where we were alums, and I am excited that we have an opportunity to do it at home here at CWRU in Cleveland, too. This would have made Dave very happy.”

“Dave was always asking me how JumpStart could play a more significant role in accelerating entrepreneurship at CWRU,” JumpStart CEO Ray Leach said. “That is why we’re so excited about the opportunity to partner with Bob Pavey and our long-time partner, the Ohio Third Frontier, to create an entrepreneurial competition that will have a lasting impact at CWRU for many years to come.”

Venture teams, each composed of at least one Case Western Reserve student or recent alumnus, will submit presentations for their business concepts to Shane’s Entrepreneurial Finance class by the end of October.

The class will evaluate the ventures and select the top six to present at a demo day competition to a panel of venture capitalists at Sears think[box], the university’s 50,000-square-foot innovation and entrepreneurship center, in March each year. (The first is scheduled March 15.)

The judges will select three winners for financial prizes provided by JumpStart. First place is $25,000, second is $15,000 and third is $10,000 to support the ventures.

All six finalists will be mentored by JumpStart and connected by the nonprofit to capital, talent and other business development resources in Northeast Ohio.