Through its master plan, CWRU begins developing blueprint for the future 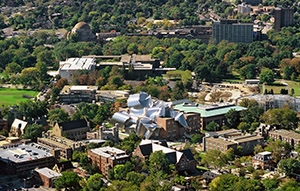 Think a master plan involves a plethora of pretty campus drawings that do little more than sit on a shelf?

In 2005, Case Western Reserve proclaimed the critical importance of such projects as a gathering place for graduates, a student center, and vibrant dining, retail and residential development on Euclid Avenue.

Two years later, the university opened its first ever Alumni House. Three years after that, Tinkham Veale made the $20 million naming gift required to launch construction of the university center. And two years later, Uptown opened with fully rented apartments as well as more than a dozen places to shop and eat.

Those examples underscore the significance of thorough deliberation and dialogue as the Case Western Reserve community considers its next steps in campus development. Whether the ideas involve improvements to what already exists or entirely new initiatives, a real chance exists that suggestions within a plan could become fully realized structures.

At the same time, the creation of campus spaces is not an end in itself. Rather, a master plan represents one way that a university translates overarching aspirations into specific initiatives. In other words, it is a place where concepts become concrete—sometimes literally.

“The goal of the campus master plan is to interpret the vision and mission of the strategic plan into a vision for the physical campus, so this is the perfect time to be doing a campus master plan,” said Irwin Lowenstein, Case Western Reserve’s advising university architect and president of ReThink Advisors.

All of the firms competing for the opportunity to assist the university have completed master plans for peer and aspirational institutions, Lowenstein said. Once the committee narrows the pool, finalists will visit campus for in-person presentations and interviews.

Once the university selects a consultant, the firm will begin to gather data regarding the university’s needs and existing space. The firm also will consult extensively with stakeholders regarding opportunities and challenges.

Throughout the process, faculty, staff and students will be able to offer comments through focus groups, town hall meetings and other vehicles.

”The goal is to maximize participation of the campus community,” Lowenstein said.

“Right now, the university has incredible opportunities, but like all institutions of higher learning, it also has incredible challenges. President Snyder is encouraging us to embrace both—and continue to think big,” Lowenstein said. “A campus master plan is more important than ever.”