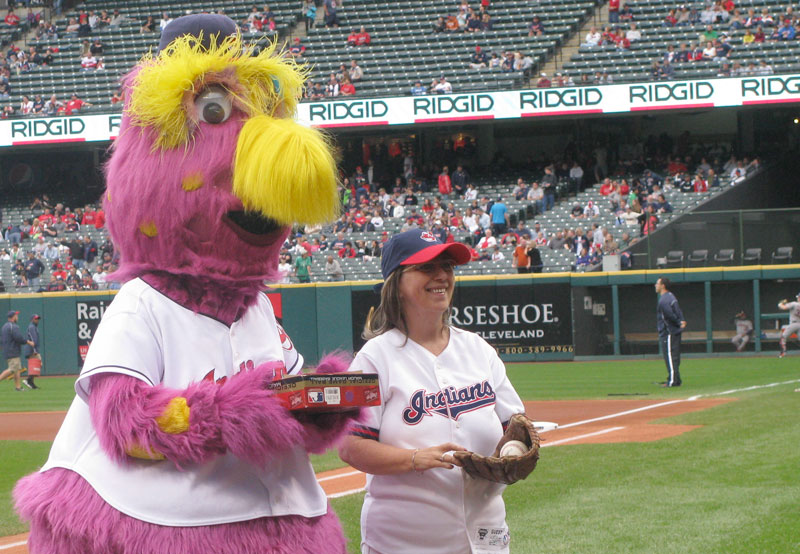 Earlier this year, the Cleveland Indians named Robin Kramer their season ticket holder of the year, and she was invited to throw out the first pitch at a game in September.

Robin Kramer, former chair of the Staff Advisory Council and effort reporting specialist in the Office of Research Administration, died Friday, Nov. 1. She was 58.

A dedicated Case Western Reserve employee for 21 years, Kramer was known for her passion for serving the university and its employees. In 2005, she earned the President’s Award for Distinguished Service—an honor that recognizes staff for outstanding contributions to the university community. An active member of the Staff Advisory Council (SAC) since 1999, Kramer held the positions of vice chair, chair and past chair of the council. She also co-chaired its elections and staff recognition committees.

“I have always considered Robin to be the heart of SAC. … Robin’s enthusiasm and energy were evident in everything she did,” said Barb Juknialis, 2013-2014 SAC chair. “If she was your friend, she was always available to help with whatever. And she was everybody’s friend.”

An alumna of Kent State University and Cleveland State University, Kramer spent much of her career at Case Western Reserve. Throughout her years on the staff, she worked in gifts processing, the controller’s office and, most recently, the Office of Research Administration. As an efforts reporting specialist, she monitored researchers’ work on grants, administered the university’s effort reporting policies and procedures, and trained administrators to comply with federal and state regulations.

Kramer was known across campus for her enthusiasm and exuberant personality. “Robin was very well respected and loved by many,” said Diane Domanovics, assistant vice president for sponsored projects in the Office of Research Administration. “Her infectious smile and contagious laugh will be greatly missed.”

An avid Cleveland Indians fan, Kramer was selected as the team’s season ticket holder of the year for 2013. Juknialis recalled when Kramer threw the first pitch at a game in September.

“She was so excited when she told me she had been chosen that she was literally jumping up and down,” Juknialis said. “I will always remember her smile that day.”

Kramer is survived by her husband, Richard; daughter, Denise (Jeff) Masters; and son R. Todd Kramer. She was preceded in death by her son Christopher.

The family will receive friends from 5 to 7 p.m. on Tuesday, Nov. 5, at the Campfield-Hickman-Collier Funeral Home (566 W. Park Ave., Barberton). A private service will be held for the family.