Progressive Insurance Co. chair to give address, receive honorary degree on 10th anniversary of the opening of the Weatherhead School of Management building that bears his name 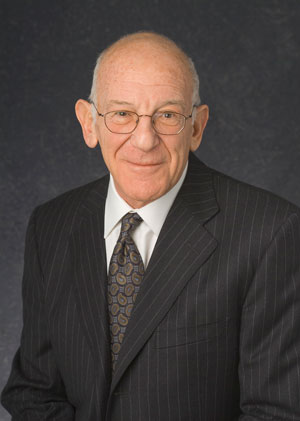 Renowned business leader and philanthropist Peter B. Lewis will return to a Case Western Reserve stage May 19 as the university’s 2013 commencement speaker. Lewis, who addressed the campus a decade ago at the dedication of the landmark building that bears his name, last appeared at the graduation ceremony in 2008. On that occasion—Barbara R. Snyder’s first as the university’s leader—Lewis received the inaugural President’s Award for Visionary Achievement.

“Peter B. Lewis exemplifies many of the qualities we seek to instill in our students,” President Snyder said. “He possesses a passion for excellence, an appreciation for the arts and a devotion to using his resources to improve the world. He has great wisdom to share with our graduates and their families.”

As part of the ceremonies, Lewis also will receive an honorary degree from Case Western Reserve, the alma mater of his mother, father, sister and ex-wife, Toby Devan Lewis, as well as several earlier generations of his family. Lewis, who grew up in Cleveland Heights, earned his bachelor’s degree from Princeton University before returning to Northeast Ohio to join Progressive, the insurance company his father cofounded in 1937. In 1965, when he was 31, Lewis became CEO—a position held until 2000. Lewis remains chairman of Progressive today.

A company that claimed fewer than 50 employees when Lewis arrived now counts more than 25,000 employees across the country and more than $17 billion in annual revenue. Lewis achieved the extraordinary growth through a combination of a tireless work ethic and unwavering commitment to constant innovation. His willingness to go beyond traditional practice proved invaluable to the company in 1988, after California voters passed Proposition 103, a measure that required auto insurers to roll back rates by 20 percent and provide other benefits to consumers.

While other leaders reeled, Lewis worked to transform Progressive into an insurance company that customers trusted. The company launched initiatives providing 24-hour response services and having adjusters drive to accident scenes or people’s homes. As the company explained in its 1990 annual report:

Progressive is at its best managing the unimaginable and doing the impossible. We will create an auto insurance experience that exceeds customers’ highest expectations.

Business scholars Jim Collins and Morton Hansen, authors of Great by Choice, point to this approach as a key reason that Progressive Insurance is a “10xer”—a company that exceeds industry performance by a factor of 10. In describing the CEO’s response to Proposition 103, they explained in The New York Times:

Progressive and Mr. Lewis illustrate how 10Xers shine when clobbered by setbacks and misfortune, turning bad luck into good results. They use difficulty as a catalyst to deepen purpose, recommit to values, increase discipline, respond with creativity and heighten productive paranoia—translating fear into extensive preparation and calm, clearheaded action. Resilience, not luck, is the signature of greatness.

Yet along with those traits, Lewis also wanted to instill creative thinking among his employees. As part of that effort, Lewis began installing contemporary art within the insurer’s Mayfield Heights headquarters in the 1970s. In 1985, he asked his ex-wife Toby, then at the Cleveland Center for Contemporary Art, to curate the collection. The goal was to enrich the environment and inspire innovation among employees. The collection now numbers more than 6,000 pieces; thanks to her discerning eye, it includes significant works by emerging artists before their talents became widely recognized.

Peter Lewis has gone on to show his dedication to the arts in several other contexts. He served as chairman of the board of the Guggenheim Museum and contributed $77 million to the institution. He also committed $101 million to his alma mater’s sweeping initiative to integrate the creative and performing arts more broadly into students’ overall academic experiences. Lewis earlier gave $55 million to the university for an institute of genomics, and $60 million for a science library designed by his longtime friend, the famed architect Frank O. Gehry.

Lewis and Gehry worked together on the Peter B. Lewis Building at Case Western Reserve, the landmark home of the university’s Weatherhead School of Management. Funded by a $36.9 million lead gift from Lewis, the building embodied his ideas about the ways that unconventional design can contribute to original, even ingenious thought. The structure’s soaring silver curves combine with an airy, almost playful interior whose floors feature the phrase “Risk. Learn. Grow.” in the philanthropist’s own handwriting.

Last fall Lewis signed the Giving Pledge, an initiative launched by Bill Gates and Warren Buffet to encourage the world’s wealthiest individuals to commit at least half of their wealth to philanthropic causes or organizations. In his letter to the two leaders, Lewis explained:

I began giving with nickels to my Temple when my father explained to me that giving to help others is a Jewish tradition. Those nickels, contributed over the years, now total nearly $500 million. Having already given away nearly half of my net worth, I plan to keep on going. I have also tried to teach my children and grandchildren to be effective philanthropists in their own right.

Lewis will share lessons from business, giving and life during commencement exercises that will be held May 19 beginning at 9:30 a.m. in the Veale Convocation, Athletic and Recreation Center. For more information please visit case.edu/commencement.