Passersby pause and watch or stick their heads into the tucked-away nook for a better view. Some snap photos. 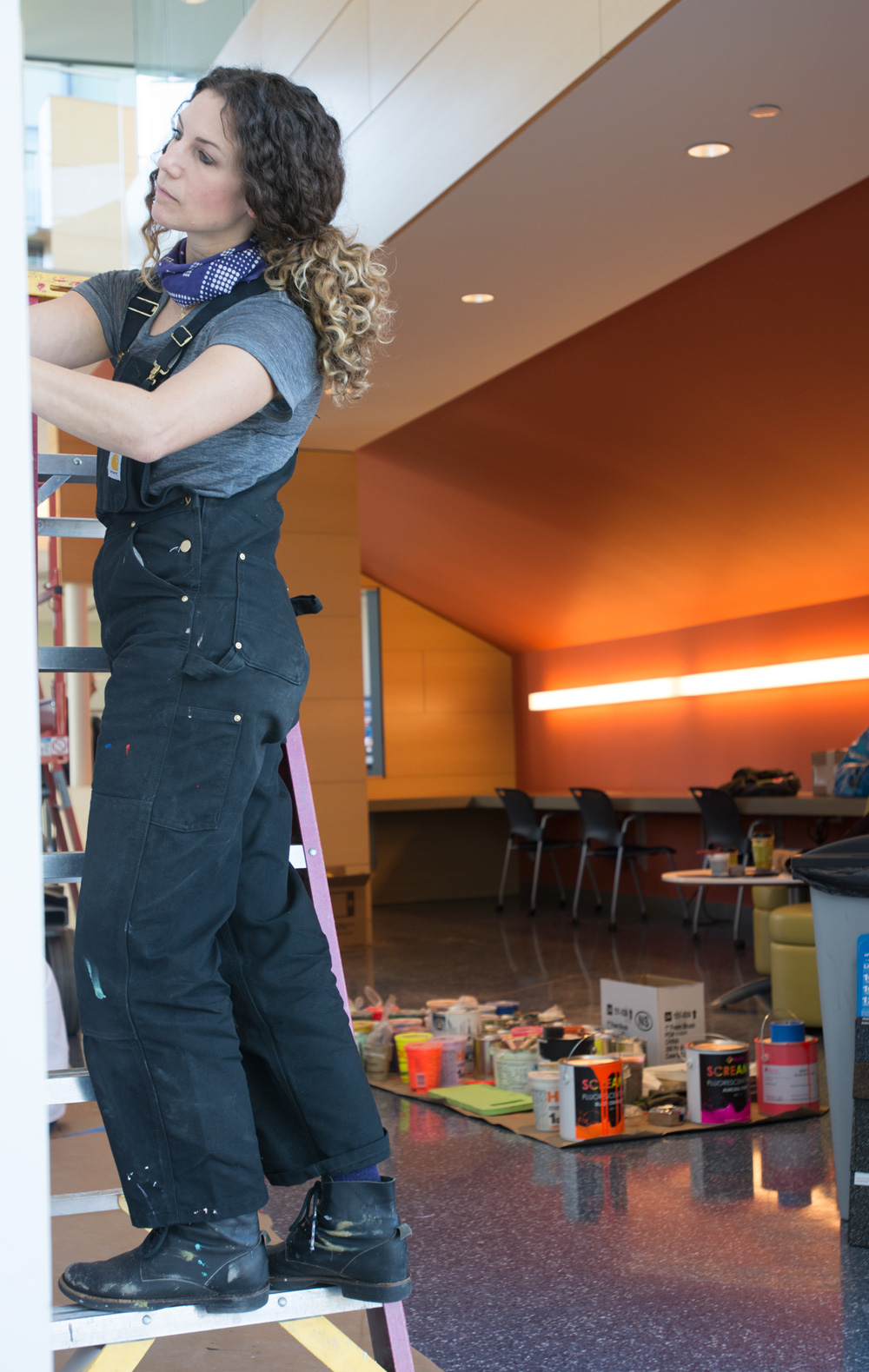 This week, the two-story white wall—actually 29 feet wide by nearly 28 feet tall—behind the Grand Staircase at the center of the Tinkham Veale University Center is evolving into an art installation of multi-colored geometric shapes.

It’s the work of Toledo artist and alumna Natalie Lanese and 16 student volunteers from various disciplines, not just art.

When completed Saturday, “Cavern,” as the mural is called, will become the latest piece of the university’s John and Mildred Putnam Sculpture Collection, a compilation of 50-plus sculptures and other pieces of public art that enrich the campus and University Circle environment.

Kathy Barrie, a veteran museum consultant and public art administrator who directs the collection, said the behind-the-staircase space, known as the “Immersion Zone,” was identified for public art when the two-story, 82,000-square foot university center was built in 2014.

But it wasn’t until Barrie was drawn to Lanese’s work at an Akron Art Museum exhibit in January 2016 that she thought she’d found the right look and artist for that assignment. It just so happened that Lanese, who earned a master’s degree in art education from Case Western Reserve in 2005, also had a university connection. 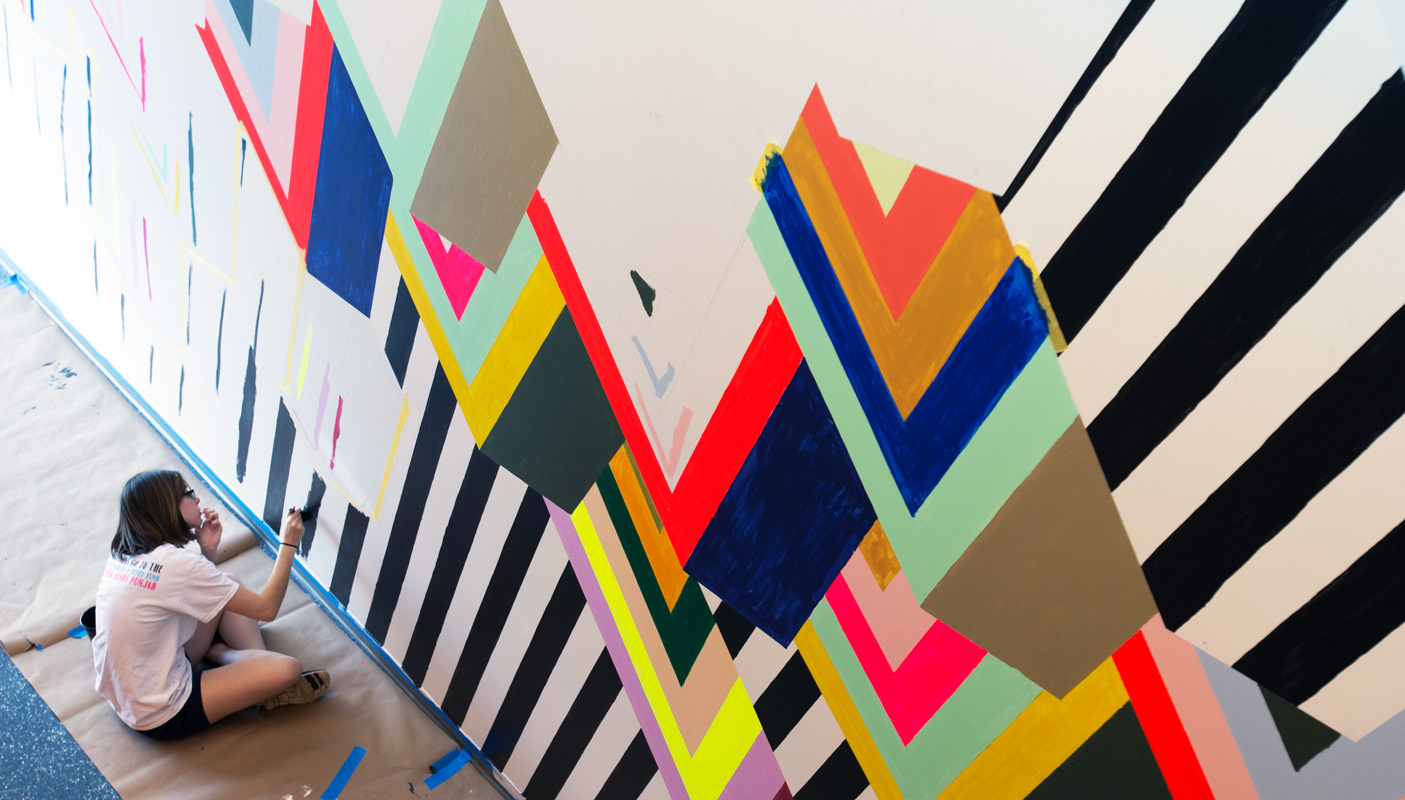 “We’ve wanted to do a piece here,” Barrie said, “and just came up with the right person at the right time. I love the color. This is such a bold use of color.”

They met at “The Tink” last August to look at the space together. Barrie asked if she would be interested.

“I said, ‘absolutely,’” recalled Lanese, who grew up in suburban Lyndhurst, Ohio, and now lives in Toledo.

Timing-wise, Lanese, an assistant professor of art and gallery director at Siena Heights University in Adrian, Michigan, needed to schedule the work this week during her spring break.

Meanwhile, the 16 student volunteers were intrigued enough in the project to invest their valuable time—and shuffle their busy schedules—the week before Case Western Reserve’s spring break. 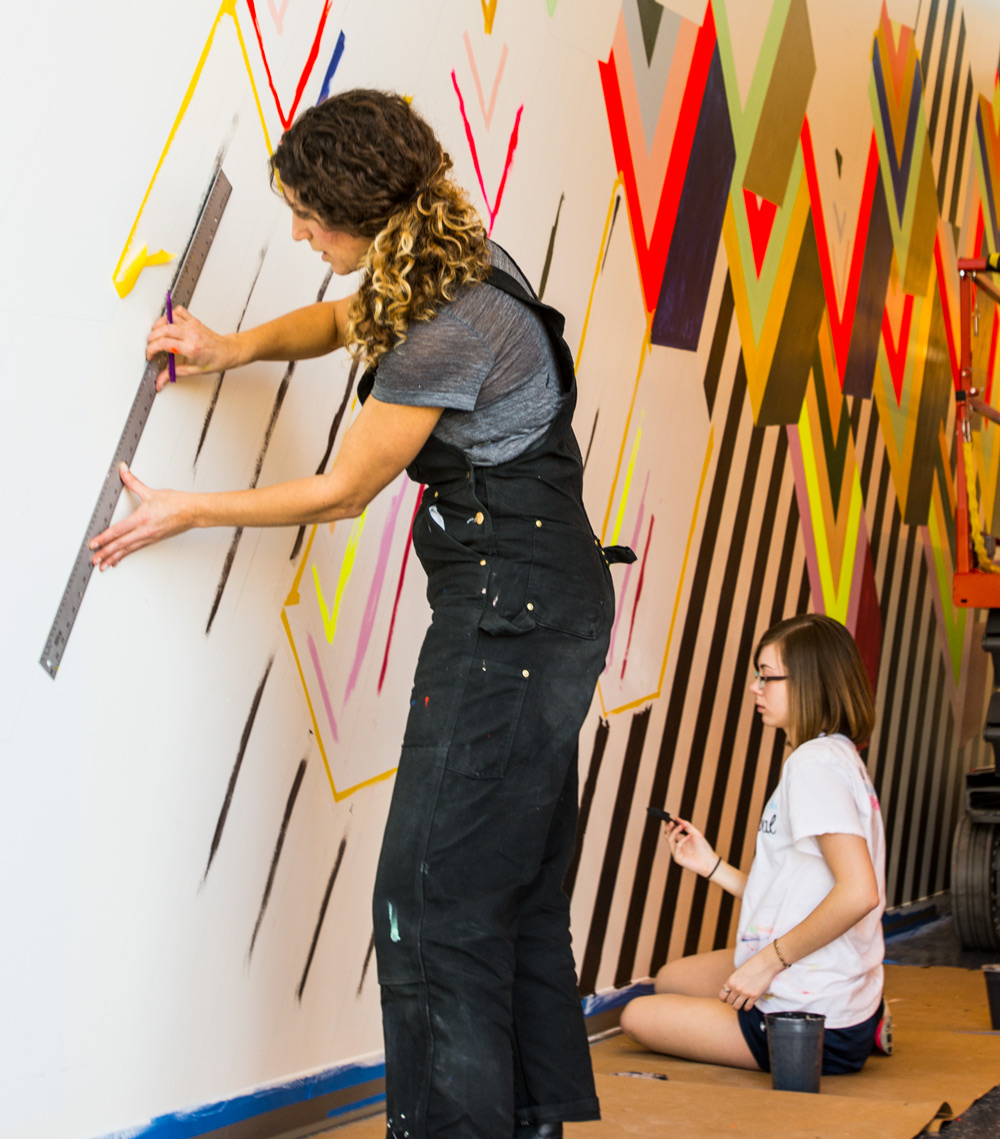 “This is the first piece in the collection that students have worked on,” Barrie said.

Lanese maps out the lines and marks the appropriate color for each shape on the wall. The students apply the paint—except for the highest reaches. For that, the artist climbs into a mechanical “scissor lift,” called a Skyjack.

Mia Hafer, a senior art history major from Zanesville and one of Barrie’s Putnam interns, worked on the wall Monday for 8 ½ hours and put in another three hours Wednesday morning.

“(Barrie) asked if we’d be interested,” said Hafer, who hopes to pursue curatorial work at an art museum, “and we just jumped on the opportunity.”

Other student volunteers are studying psychology, chemistry and other non-artistic majors.

Caitlin Chatten, a first-year psychology major from the Dallas area who is considering picking up art as a minor, said she responded to a sign in the university center seeking volunteers for the project—despite her coursework. 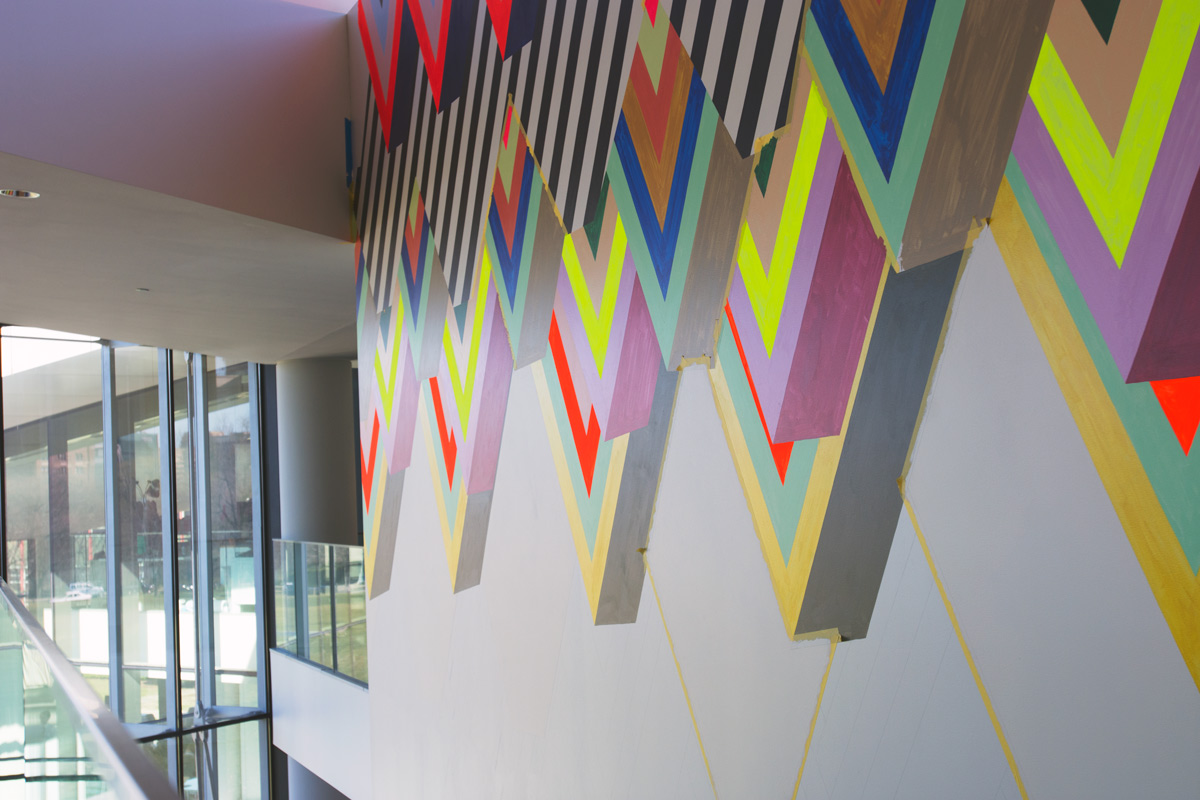 “Cavern,” from the top of the Tink’s Grand Staircase

“I did have two midterms this week,” she said, paintbrush in hand, “so this is good stress-relief.”

Lanese described “Cavern” as a zig-zagging, brightly colored geographic design—a pattern she has worked with and which has evolved in her paintings for about 11 years.

“Optical illusion is a big part of what I’m interested in at the moment,” she said. “The shapes appear to recede and come forward at the same time. The work provides a form for color to play with our perceptions.”