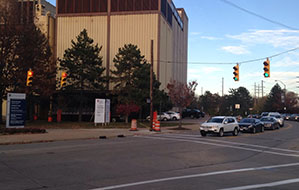 Persistence proved to be the key to installing a traffic light at the three-way intersection of Adelbert Road and Circle Drive.

For many years, the Staff Advisory Council (SAC) lobbied to have a light replace the stop signs at the intersection. The intersection had become a safety concern for many in the university community, especially for those who park in the Veale Center garage and use the crosswalks to get to health sciences buildings, Richard Jamieson, vice president for campus services, explained.

“Because of the nature of the three-way stop, people had a habit of not fully stopping at the stop sign, which created a lot of near-accidents and, in some cases, accidents involving pedestrians and bike riders in the crosswalk,” Jamieson said.

Jamieson and SAC had brought the issue to the city’s attention numerous times before, but were stymied by its reluctance to put a traffic light at a three-way stop. Typically, those are reserved for four-way intersections.

About two years ago, SAC brought the concern to the table again. Barb Juknialis, administrative director of the Department of Bioethics and past chair of SAC, partnered with Campus Services to convince the city to act.

The timing was right and the city agreed to add a light to the intersection.

“We didn’t get immediate action, but we stayed with it,” Jamieson said.

In the weeks since the light debuted, traffic patterns have improved, according to Jamieson.

People now are forced to stop completely at the intersection, which improves safety for pedestrians. It has an added benefit of controlling the flow of traffic as well.

So far, Jamieson has received positive feedback on the light’s impact.

“Certainly, it’s changed the habits at the intersection,” Jamieson said. “We will continue to monitor this and other intersections, and seek to improve pedestrian safety whenever possible.”