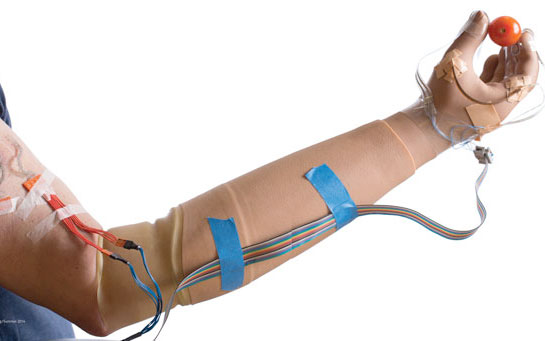 Dustin Tyler created this version of the prosthetic arm, which only can be used in the lab.

Case Western Reserve University researchers who helped restore a sense of touch to amputees in a U.S. Department of Veterans Affairs lab in Cleveland are finalizing contract negotiations for a $4.4 million grant from the Defense Advanced Research Projects Agency (DARPA) to speed development of a mobile system amputees can use anywhere.

To speed progress on several aspects of the project, the researchers have assembled a team of experts from across the country.

If milestones are met during the next 18 months and beyond, the team may be eligible for nearly $16 million in DARPA funding over five years.

“We’d soon like to have a system working outside the lab, so that amputees can touch and feel things out in the community where they live,” said Dustin Tyler, associate professor of biomedical engineering at Case Western Reserve and leader of the project. “By the end of five years, we want to have a product people can take home and use daily.”

Tyler’s current system, which uses electrical stimulation to give amputees a sense of feeling, is currently limited to the laboratory and two patients.

Here’s how it works:

When researchers touched different parts of a blindfolded patient’s prosthetic hand with different textures, the patient discerned where the hand was touched and could identify different textures. The changing signals sent to the nerve resulted in different types of sensation, such as water running across the palm or cotton brushing the back of the hand.

Signaling was also used to enable patients to feel an object in their prosthetic fingertips and how hard they held it. Blindfolded, they could pluck stems from cherries or grapes from a bunch without crushing the fruit.

The system has only been used for the hand, but researchers believe those who have lost legs or feet can use it to sense and better maneuver uneven ground. The system may also be used in patients suffering paralysis to regain movement, assist in breathing and bladder control and more.

With the new grant, Case Western Reserve, Medtronic and Ardiem will refine the cuffs to improve the clarity of signals and sensations, recruitment of nerves and control of the prosthetic hand. They plan to test the system on more patients.

The team will also investigate novel approaches to signaling the nerves to restore sensation to the hand, including the sense of touch and of proprioception, feeling the shape of owns own hand. The University of Chicago’s Sliman Bensmaia studies the response of nerves to stimulation at fingertips. The researchers will try to mimic the signals created by natural sensations. At the same time, Philip Sabes, at the University of California, San Francisco, will lead a study of whether learning can improve sensation over time.  Amputees will try to train their brains to reinterpret some nerve inputs in order to provide the most useful sensations for controlling the hand.

“It is a bit like when we are young, when we first learned how the nerves responded to touching different things,” Tyler said. “We’re looking if that process can be repeated.”

Ocean State Research Institute will develop tests to show the value and reliability of the prosthetic system in changing the hand function, personal interaction and quality of life for those with limb loss.

When finished, the only outside piece of hardware for the user, other than the charger, would be an iPod-size computer to receive input, convert it to signals and communicate wirelessly between the system components. The researchers will test the system on prosthetic hands developed by DARPA.