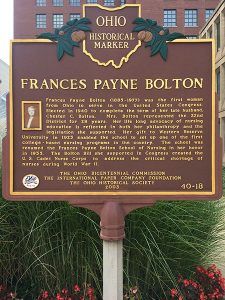 Case Western Reserve University has a rich history—so rich, in fact, that several sites around campus have been designated with historic markers. This month, we’ll take you around campus to highlight some of the university’s most historic spots.

An Ohio Historical Marker stands outside the Frances Payne Bolton School of Nursing in honor of the school’s namesake.

A gift from Frances Payne Bolton enabled the School of Nursing to become a separate college at the university, rather than a department of the College for Women. In 1935, the school was renamed in her honor. 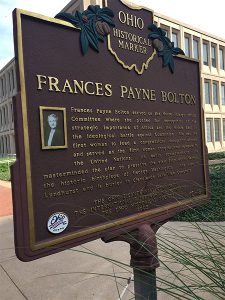 Bolton was Ohio’s first elected congresswoman, and the seventh woman to be a member of the House of Representatives. She was elected in 1940 to serve out the term of her husband, Chester C. Bolton, and went on to serve for 29 years.

In Congress, Bolton sponsored the Bolton Act of 1943, which launched the U.S. Cadet Nurse Corps. Through this legislation, federal funds were appropriated to nursing schools and provided scholarships to the cadets.

It is considered to have had a lasting impact on nursing education and has been called “the most significant nursing legislation in our time.”