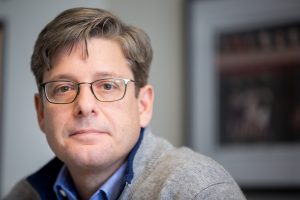 Jim Sheeler’s classes—and much of his journalistic career—center on telling untold stories; celebrating those who didn’t make headlines, but whose lives could fill volumes.

On day one of his “Introduction to Journalism” class, students are given their first assignment: Observe, then write about, something outside their comfort zone. It’s a charge these bright-eyed but sometimes-shy students have embraced—a football player learned the ropes at a nail salon, a vegan shadowed a butcher—all in the name of breaking out of the Case Western Reserve “bubble.” And, of course, of finding a good story.

Such assignments are typical for Sheeler’s students, who are challenged regularly to seek out the best stories, no matter where they might be hiding. It’s just one of the many reasons Sheeler, who joined Case Western Reserve’s faculty as the Shirley Wormser Professor of Journalism and Media Writing in 2011, will be honored at commencement with the Carl F. Wittke Award for Excellence in Undergraduate Teaching. Sheeler will receive the award along with Amy Absher, lecturer of history, on Sunday, May 15, during commencement ceremonies. The award was established in 1971 in honor of Carl Wittke, a former faculty member, dean and vice president of Western Reserve University, to recognize demonstrated excellence in undergraduate teaching.

Sheeler’s students recognize his exceptional teaching qualities. They love hearing from journalists in the field, who Sheeler has Skype in to class. They enjoy the music he plays at the start of each session to help them better understand the era about which they’re learning. And they are impressed that he gives out his cell phone number so they can text him—their editor—for assistance.

They also appreciate his real-world, and award-winning, experience.

After graduating from Colorado State University, Sheeler worked as a newspaper reporter, covering breaking news and writing features. But he found himself enthralled with the death notices that came across the fax machine from area funeral homes.

“There was one in particular that listed the woman’s occupation: florist and butcher. I loved that, and I thought: ‘I wish I would have known her. I wish I could have written about her,’” he remembered. “And then I realized I still could.”

So Sheeler carved out his own niche, writing obituaries to showcase the lives of people who otherwise probably never would have appeared in a newspaper.

Their stories helped shape his Iraq war coverage. He followed a U.S. Marine Casualty Assistance Calls officer and the families he touched as he let them know of the loss of their loved ones. This assignment turned into a 12,000-word newspaper article that won the 2006 Pulitzer Prize for Feature Writing and then a book, Final Salute, which was a finalist for the 2008 National Book Award in nonfiction writing. 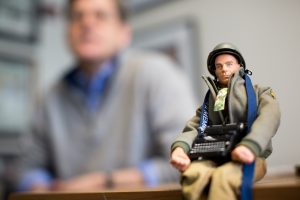 Jim Sheeler brings an action figure of Pulitzer Prize-winning American war correspondent Ernie Pyle (pictured here on his office desk) to his “Telling War Stories” course to show the influence of the written word. “I tell them that he’s the only G.I. Joe without a gun—but his weapon is far more powerful,” Sheeler said. “He has a typewriter.”

Sheeler takes the lessons he learned capturing and sharing these stories into the classroom: In his “Telling War Stories” course, students travel to the Greater Cleveland Veterans Memorial and find a particular soldier’s name—then, research and tell the tale of that often-unsung hero.

It’s an assignment that strikes an emotional chord with the students, Sheeler said, spurring a deeper connection with the wars that have occurred—usually in the background of their lives—since they were in third grade.

It also pushes them to become more comfortable talking with strangers, researching to find the truth and seeking new ways of communicating effectively—whether through written word or other outlets, such as video or social media.

“He’s a Pulitzer Prize-winning journalist who is the nicest, most humble person I’ve ever met,” a student nominator wrote. “For every student trying to pursue journalism, Jim Sheeler is a godsend.”