HoloAnatomy, a demonstration app that allows people wearing the Microsoft HoloLens device to view a detailed three-dimensional hologram of the human body, emerged as the judges’ first choice during a gala celebration at the Harvard Art Museum. It bested two other finalists: Google’s Tilt Brush, a virtual reality program that allows users to “paint” in three dimensions, and Attenborough’s Great Barrier Reef Virtual Reality Dive, a 20-minute film that provides a 360-degree view of Australia’s natural wonder.

“I am so proud of our team. This win is wonderful recognition for everyone involved in this project,” said Mark Griswold, faculty director for Case Western Reserve’s Interactive Commons and leader of the university’s work with Microsoft HoloLens. “It is also a testament to the power of mixed reality to engage and inspire learners in ways we only could have imagined previously.” 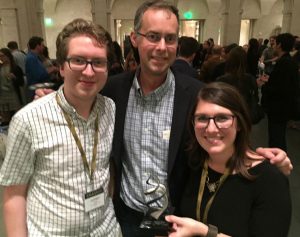 The international competition recognizes extraordinary achievement in science communication across a broad range of media. This year’s contest began with more than 500 entries competing for 25 awards. More than 120 judges narrowed the pool to three to four finalists for each category, and then a five-member jury selected individual winners. Subjects included Health & Medicine, Technology & Innovation, Engaging Young Scientists, and short- and long-form films. Submissions came from such organizations as NOVA, National Geographic, the BBC and the MIT Game Lab.

The entry from Case Western Reserve and Cleveland Clinic emerged from a collaboration with Microsoft that began in late 2014, before HoloLens even became public. The university and hospital are collaborating on a state-of-the-art Health Education Campus for medical, dental, nursing and allied health students. From the start, leaders of both organizations have emphasized the imperative of providing the most advanced technology possible to enhance and accelerate education. As soon as Case Western Reserve President Barbara R. Snyder and Cleveland Clinic CEO and President Toby Cosgrove participated in a HoloLens demonstration, they recognized its enormous potential for students.

Griswold and his team now are developing a full holographic anatomy curriculum for medical students who start classes at the new campus when it opens in 2019. Microsoft HoloLens allows them not only to see organs like the heart and lungs in three dimensions, but also to see inside the structures from every angle—options not possible with the traditional cadaver without actually cutting out some of what the student wants to see.

The holograms also provide the option to show different kinds of conditions or diseases—for example, a tumor in different areas of the brain, or multiple types of bone breaks. Case Western Reserve students who have taken traditional anatomy and then interacted with holographic versions have reported being able to learn and understand certain aspects of the body that they had not been able to grasp fully with the cadaver.

An additional advantage of learning anatomy with Microsoft HoloLens is that students and teachers can see one another along with the holographic body—even if the entire class is not in one single room. They can come together virtually, and the instructor still can see where students might be struggling, answer questions by pointing directly at various areas of the hologram—or even “pull out” a part so that students can examine in greater detail.

The winning HoloAnatomy app provides an introduction to the nature of learning possible with mixed reality, and was the first third-party app for Microsoft HoloLens when released last spring. Griswold and his team at the university’s Interactive Commons also are exploring other educational and research applications for the HoloLens technology, including in such areas as music, psychology and environmental science.

The Interactive Commons is home to the university’s HoloLens-related initiatives as part of a broader mission to expand the use of visualization technologies for teaching, learning, and discovery through engagement and collaboration across the campus. The Interactive Commons includes a 24-by-8-foot visualization wall (11,000 x 8,000 pixels) where groups can gather to develop and examine new ways to convey data in compelling ways. Last spring, the IC hosted a two-day workshop for members of the campus community interested learning more about how to program for HoloLens devices; watch The Daily for additional workshop opportunities later this year.