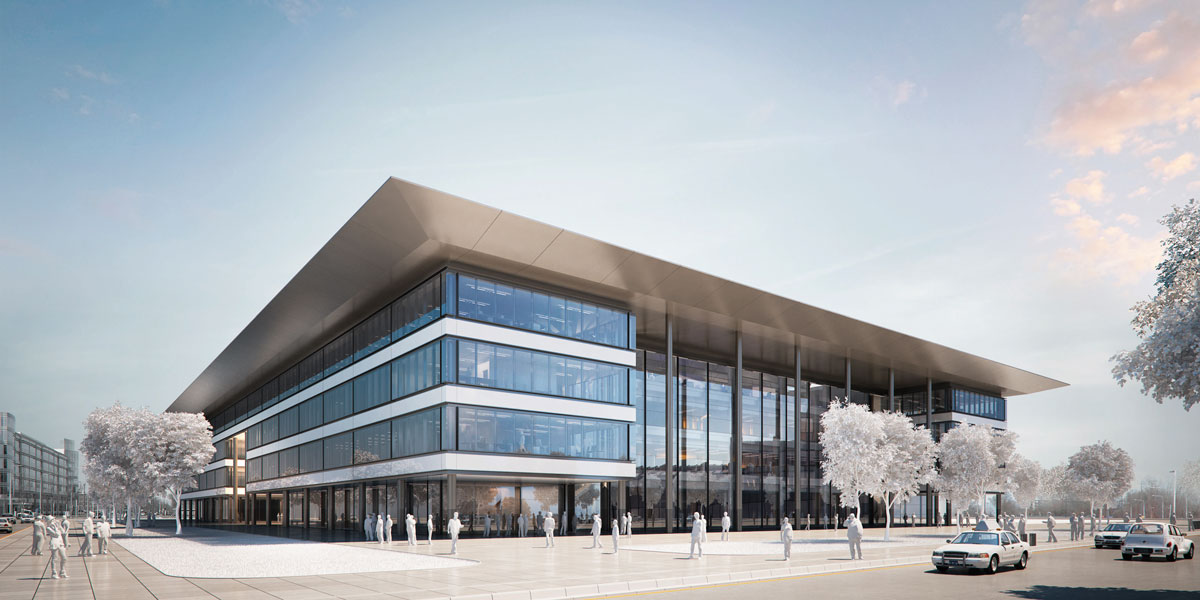 Students from the university’s schools of medicine, nursing and dental medicine—including those in the Cleveland Clinic Lerner College of Medicine—will learn, study, and collaborate together in a structure designed to encourage extensive interaction among the professions furthering meaningful innovation.

“Health care increasingly is a team sport,” said Toby Cosgrove, MD, CEO and president of Cleveland Clinic. “The students who graduate from these programs will be uniquely prepared to participate and lead in this new era.”

More than 350 people attended a groundbreaking on the site that featured the two organizations’ leaders, Foster + Partners architects, and donors. Also on hand was Lorraine Bardeen, director of Next Gen Experience at Microsoft. As part of the HEC’s pioneering educational approaches, students will use Microsoft’s cutting-edge augmented reality device, HoloLens, for lessons in subjects like anatomy.

“The ability to see individual organs and systems in three-dimensions, and then virtually explore all of their attributes when healthy or damaged, will give our students insights simply not possible with traditional cadaver-based approaches,” Case Western Reserve President Barbara R. Snyder said. “Anatomy is only the beginning of the ways we can apply this device to transform learning in the Health Education Campus and beyond.”

In 2012, Case Western Reserve shared its plans to construct a medical education building on its West Campus. As part of that announcement, the Mt. Sinai Health Care Foundation and Cleveland Foundation each announced $10 million commitments to the project—the largest in the history of either organization. Days later, medical school alumnus Michael D. Eppig, MD, and his wife, Ruth Eppig, announced a $1.5 million commitment to the project. About six weeks after that announcement, Constance and James W. Brown of Chagrin Falls committed $3.5 million in honor of School of Medicine Dean Pamela B. Davis, MD, PhD, a cystic fibrosis expert who successfully treated their granddaughter.

When Cleveland Clinic and Case Western Reserve announced their partnership for a shared medical education building in 2013, all of those donors agreed to transfer their commitments to the new joint project. Within weeks of that announcement, an anonymous donor made a $5 million commitment, and Eric and Sheila Samson made a $20 million commitment to the project. That brings the Samsons’ total giving to Cleveland Clinic to $40 million, which includes earlier gifts of $10 million to the Samson Global Leadership Academy and another $10 million to the Miller Family Heart and Vascular Institute.

In fall 2014, the two institutions announced the expansion of the project to include students from dental medicine and nursing, along with a new physician assistants program. In all, the hospital and university expect 2,300 students to be learning in the building simultaneously.

The new structure will stand on a jointly owned 11-acre parcel bordered by 93rd and 100th streets and Euclid and Chester avenues. The project also will include a separate dental clinic education building just across Chester Avenue from the larger building. This option will allow patient parking directly adjacent to the structure and allow both buildings room for expansion. Architects today estimate the total project will cost about $515 million, but hope to lower the number as the final cost of the separate building is determined—along with savings for its move out of the larger structure.

The main HEC building features a 27,000-square-foot central atrium that draws maximum light from a specially engineered roof. Admissions and other offices surround the central first-floor space, which can be cleared—even the trees—for major events.

The first floor also will include a $5 million conference center featuring a 7,000-square-foot auditorium and 4,800-square-foot lecture hall, where students from all programs will gather for interprofessional lessons, featured speakers and demonstrations. The conference center is part of an $8 million commitment to the HEC from the Jack, Joseph and Morton Mandel Foundation; the remaining $3 million will endow a professorship in and support development of a wellness and prevention concentration for medical students.

Also on the first floor will be The Rhonda and Marc Stefanski Center for Community Health Education, made possible by a $5 million commitment from the Third Federal Foundation and the Marc A. and Rhonda L. Stefanski Foundation. Students already engage in Cleveland and surrounding communities through programs like the Student-Run Free Health Clinic, health screenings in city schools, and an urban health pathway for medical students. This space will support students who seek to build on those efforts and identify more effective ways to deliver care and combat chronic disease.

To date, the two institutions together have raised more than $180 million for the project, and active joint fundraising continues.