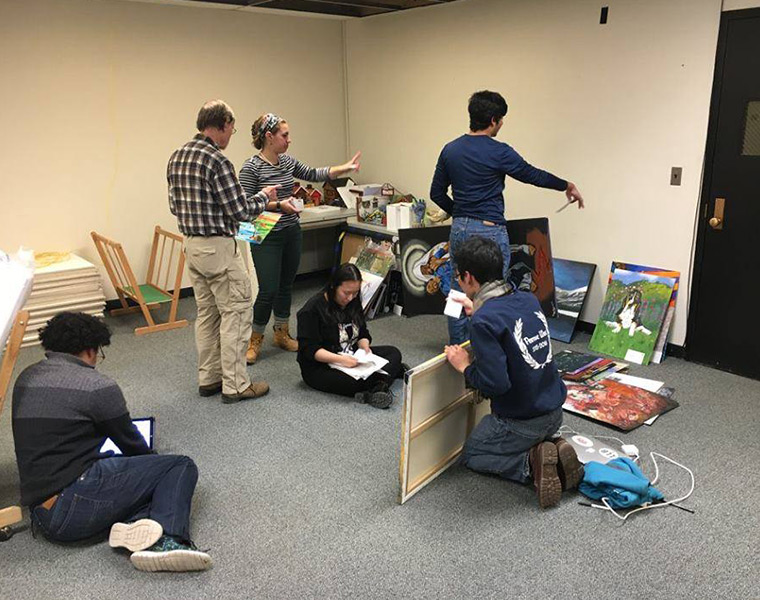 Two dozen students are spending their spring breaks in Michigan, North Carolina and off the coast of Georgia. But they aren’t vacationing—they’re working on projects designed to improve the lives of others.

The Center for Civic Engagement and Learning (CCEL) and the Case Western Reserve University chapter of Habitat for Humanity provide students with the opportunity to make the most of their breaks.

CCEL’s Alternative Breaks program takes students to Michigan for a project on mass incarceration and to Georgia for a study of the environment. Meanwhile, Habitat for Humanity is constructing a home in North Carolina.

“Beyond Orange is the New Black: Mass Incarceration in the U.S.”

The students traveled with CCEL to southeast Michigan to hear from various community organizations on how they help reform and alleviate the residual issues brought on by the system of mass incarceration. The student site leader for this program, Bianca Pierson, was drawn to it “because of the focus on social justice and creative expression as a means of advocacy and support for those involved in the system of mass incarceration.”

Pierson, a second-year music performance student, particularly seeks to learn more about the “emotional impact of creative processes on those affected by various social justice issues.”

Pierson and other students are in southeast Michigan March 12–16, volunteering with the University of Michigan’s Prison Creative Arts Project, which encourages incarcerated people to express themselves creatively. The students will assist in the operations and preparation for their Annual Exhibition of Art by Michigan Prisoners.

As many do over break, some students have escaped to a warmer climate, but they’re working hard, too. As a part of this program, students learn about the unique ecosystem of America’s largest wilderness island and work to preserve it.

One of the students participating is Lauren Dostal, a second-year English and environmental studies major. As site leader, Dostal was drawn to the program because she’d like to work for the U.S. National Park Service (NPS) after college.

“It seemed like the perfect opportunity to gain experience working with the NPS and a great chance to bond with like-minded peers,” Dostal said.

She and the other participants have spent the past few weeks in Cleveland exploring the history of Cumberland Island, its diverse ecosystem and some of the environmental factors threatening the area. While on the island, the students are completing trailwork and assisting in invasive plant removal alongside members of the NPS.

Steven Dirjayanto, one of the trip coordinators, is a first-year biomedical engineering student. Along with 11 other students, Dirjayanto headed down to North Carolina Saturday. They’re now working with locals to construct housing, using their time “meaningfully and productively,” he said.

For Dirjayanto, the break is an opportunity to be “part of a group that gives back to a community in such a direct manner and make a tangible difference to a person’s life.”

This is the third Habitat for Humanity break for Alison Swartwout, also a trip coordinator. A junior nursing student, Swartwout has spent every college spring break in a different part of the country, constructing homes for underprivileged community members.

While in North Carolina, Swartwout hopes to learn more about the community and her fellow student volunteers. In past experiences, the group often spends the evenings exploring the local area.

As for why she keeps participating in the program, she said: “I love getting to travel to different parts of the country with an awesome group of people who are just as passionate about working to eliminate substandard housing as I am.”

Students interested in an alternative break don’t have to wait until next spring to get involved, as Habitat for Humanity and the Office of Education Abroad plan to offer an international break trip over next school year’s winter break.

“It’s a great chance to experience other cultures and work alongside locals on a home construction project,” Dirjayanto added.

While they were ready to work hard and tackle complicated issues, all four students were eager to be of service.

To fellow students considering an alternative spring break, Pierson shared: “This [CCEL alternative break] is for people who are looking to give back, learn and receive friendships and skills that will stick with you long after the break is over.”