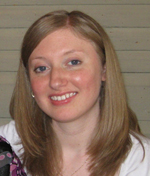 Monica Orlando, a fourth-year PhD candidate in the Department of English, will give a lecture titled “Double Voicing and Personhood in Collaborative Life Writing about Autism: The Transformative Narrative of Carly’s Voice,” on Friday, April 18, from 4 to 6 p.m. in Clark Hall, room 206.

Among the most intriguing forms in the recent autistic memoir boom is that of the collaborative memoir co-written by a person with autism and a non-autistic parent. Such dialogic texts feature the interaction of two voices, which tell stories that may in ways both corroborate and conflict with each other. Carly’s Voice, a memoir written collaboratively by Arthur Fleischmann and his autistic daughter Carly, offers an example of the potential power of the autistic person’s voice to counteract the often limiting narratives produced by the parent. This lecture argues that Carly’s acquired writing ability enables her to assert her personhood, mitigating her father’s emphasis on her apparent “emergence” or “recovery” from autism. Through her writing, Carly demonstrates not only that she is an individual after she develops the ability to communicate, but that she, and other people with autism, are worthy of consideration before, and without, verbal communication.

Orlando’s research focuses on autobiography, disability studies, and 19th- and 20th-century American literature. Her dissertation, tentatively titled “Contentious Constructions: Representing Autistic Subjects in Auto/Biography,” examines issues of representation, personhood, voice, and authority in life narratives about autism, including published autobiographies and online writing by people with autism, parent memoirs about raising children with autism, and collaborations between autistic and non-autistic people. She has published in Diesis and Critical Disability Discourse and is the president of the university’s English Graduate Student Association.