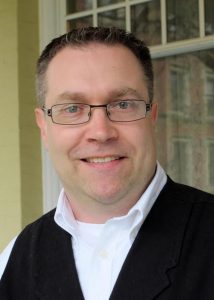 English professor Kurt Koenigsberger likes to joke about being the perpetual also-ran.

His students have nominated Koenigsberger, who teaches and researches British literature of the late-19th and 20th centuries and serves as the English department’s director of graduate studies, for the John S. Diekhoff Award for Teaching in 2002, 2005, 2008, 2009 and 2011.

They’ve nominated him for the Diekhoff Award in Mentoring in 2009, and for the Carl F. Wittke Award for Excellence in Undergraduate Teaching in 2005 and 2007.

But he never took home the “hardware”—until now.

The first thing Koenigsberger did after learning he had won the 2014 Diekhoff Award for Mentoring was share the news with his family.

“Do you get a trophy?” his children wondered.

On Friday, April 25, Koenigsberger was able to show them the marble red apple that President Barbara R. Snyder presents faculty award-winners each year.

Koenigsberger said the award presents an opportunity to showcase the intellectual energy and accomplishment of graduate students in English. He counts working with this group of students during the past 14 years among the great privileges of his career at Case Western Reserve.

To students, Koenigsberger above all represents across-the-board generosity.

“He is generous with his time, his thoughtful advice and his enlightening stories,” wrote a student nominator.

That includes stories Koenigsberger relates about mistakes he made as a graduate student, from which he hopes his students can learn. To be a successful mentor, he said, requires a willing student, clear expectations and the capacity to listen and then provide guidance.

“Professor Koenigsberger has the ability to ask questions that lead me to research or to a line of thinking that enables me to articulate the problem or solution myself, rather than simply handing me an answer,” the student continued. “This mentoring encourages me to develop as an independent researcher and to manage difficult research problems on my own terms.”

During Koenigsberger’s term as director of graduate studies, he has introduced a steady stream of programming on professional development. The department created dedicated workshop space in Guilford House for graduate students, put together a graduate-student publication workshop, and inaugurated a Colloquium Series that brings together students with national scholars and writers. The English department also instituted a department-wide electronic portfolio to prepare students for the academic job market.

In 2011-12, the department’s graduate students established the English Graduate Student Association (EGSA) with academic, social and philanthropic endeavors that promote community. The group’s activities have included a summer softball team, a murder mystery evening at Alumni House and cooking dinner together for families of Ronald McDonald House, a nonprofit devoted to the health and well-being of children.