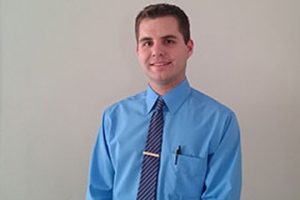 A few years ago, a passion for chemistry and intrigue in engineering led Joseph Toth to an African village, where he helped bring electricity to a family for the first time. Now, Toth is going global again. Only this time, that drive and enthusiasm have earned him a spot as a Fulbright Scholar.

After receiving his bachelor’s degree in chemical engineering last year and continuing his academic career as a PhD student at CWRU, the Fulbright Scholarship Board recognized Toth with the award to conduct research in Finland.

The Fulbright Scholars Program was founded in 1946 by Sen. J. William Fulbright as an initiative to encourage students, as well as professionals, to pursue passions on a more global level while providing them with the grants to do so.

Toth is one of three students from Case Western Reserve University to earn the award this year, along with Max Feinstein and Jacob Christ.

Encouraged by his advisers Mohan Sankaran, professor of chemical and biomolecular engineering, and Daniel Lacks, the C. Benson Brank Professor of Chemical Engineering, Toth applied to go to the University of Turku in Turku, Finland. His two advisers previously worked with another professor at that university and wanted to send a student to work alongside him.

Toth will now be that student.

During his nine-month electrostatics research project, beginning on Aug. 16, Toth will study how identical materials become statically charged after coming in contact with one another—and how to control that charge. Essentially, Toth explained, he’ll be working to learn how to control the electric charge that’s produced when you rub a balloon on your younger sibling’s hair, or the shock you get when you touch a doorknob after walking across a room.

During his previous experience abroad, Toth traveled to Botswana, where he completed a month-long project in a small village in the Kalahari Desert. He collaborated with fellow students in Botswana to install electricity into the home of a widow and her three children.

Despite being away from home before, Toth is still nervous about working in Finland for nine months. While he can’t speak either of the two native languages, Finnish or Swedish, Toth hopes to learn a few basics before he leaves.

“The language barrier will add some challenge to my time there and my research,” he said. “Fortunately, English is predominantly used in their academic community.”

Toth hopes to expand his limited experience with their culture, trying out some of Finland’s customs, such as their popular saunas, and checking out some of his U.S. interests abroad, including soccer and antique agricultural equipment (he’s part of a club that studies the historical objects).

“I really enjoyed my time here at CWRU. It was very challenging, but it helped develop me into a much better person,” said Toth. When he returns to the United States after finishing the Fulbright program, he will continue his second year in the chemical engineering PhD program.