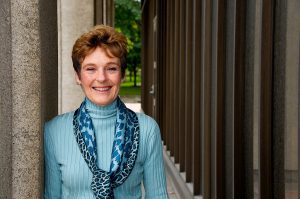 The M. Roger Clapp University Professor of Arts and Sciences was recognized for that guidance by being chosen a Distinguished University Professor, a title acknowledging the outstanding contributions of full-time, tenured professors with exceptional academic records of research, scholarship, teaching and service.

“I was totally surprised,” Barkley said, grinning. “Usually, those have been long-term members of the university community, and I moved here as a full professor in the 1996-97 academic year. More than half my career was elsewhere.”

Barkley will be one of four Distinguished University Professors celebrated during Fall Convocation on Aug. 31 at Severance Hall.

The 74-year-old biophysical chemist views the honor as another chance to serve as a role model, especially for other women or others who have been underrepresented in science research. Making the population of research scientists larger and more diverse is her passion.

“I’m grateful that more women are being recognized now,” she said. “Everyone talks about the role model effect. People dedicated to an academic career and research, as I am, do it for the science.”

College of Arts and Sciences Dean Cyrus C. Taylor, in his nomination letter to Provost William A. “Bud” Baeslack III, relied greatly on a recommendation from Professor Kathleen Kash, chair of the Department of Physics. Kash wrote about Barkley’s research and more. She noted that Barkley organizes the popular “Lady Chairs” lunch, where female chairs gather to share experiences, successes and failures, and to provide needed information to one another.

“She is known as the go-to person for advice on the many difficulties that women still face in an academic science career, and she provides wise counsel to other female faculty, graduate students and undergraduates,” Kash wrote.

Participants in a Lady Chairs lunch discuss a wide range of topics, from how to get a task done to dealing with sensitive situations, while remaining aware of confidentiality.

Barkley’s research focuses on a viral protein of HIV. She’s also worked on tryptophan fluorescence in proteins. Tryptophan is an amino acid, but it’s the only one that fluoresces well. It’s used to monitor changes in protein structure. The proteins of viruses are different from those of the cells that they infect, yet essential for the life of the virus, so viral proteins are good targets for drugs, Barkley said.

Barkley earned her PhD in physical chemistry from the University of California, San Diego. She completed her postdoctoral research at the prestigious Salk Institute for Biological Studies. Since then, she has published more than 60 papers advancing biological chemistry, and has dedicated her career to studying interactions of large proteins. She received the Biophysical Society’s Distinguished Service Award in 2003.

Barkley cares deeply about increasing the number of women in Case Western Reserve’s science, math and engineering programs. She was involved in the 2003 NSF-ADVANCE Institutional Transformation Award that funded the university’s continuing Academic Careers in Engineering and Science (ACES) Program.