Case Western Reserve University’s Squire Valleevue Farm in Hunting Valley, which harvests food for the campus dining halls, now is supplying healthy fare to another kitchen: the one that feeds the animals at the Cleveland Metroparks Zoo.

“Animals, like humans, get diabetes and heart disease,” said Christopher Bond, the farm’s horticulturalist. “They need to eat healthy.”

The first shipment held 13 pounds of greens. As production revs up with the warming weather, the zoo will receive a weekly order of more than 300 pounds of greens and hay. The request includes 57 pounds of endive, 78 pounds of dandelion greens and 209 pounds of romaine lettuce. Bond also plans to dedicate 20 acres to produce hay for the zoo’s grazers.

Last fall, Bond approached the zoo about providing food for the animals. They liked the idea and told the farm which ones they would want us to grow. 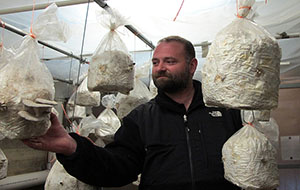 The mushrooms soon will head to campus, Bond said, and will be sold this summer at the university’s weekly farmer’s market or to Community Supported Agriculture subscribers.

The mushrooms grow on the outside of special bags that contain materials needed to produce “a flush,” or crop of mushrooms. Depending on the weather, each bag can produce up to three flushes over 20 weeks. Of the sized bag, each flush should yield approximately one pound of mushrooms.

Next up is a new worm farm, for which Bond has enlisted the advice of Paula Simpson, 2013 alumna of the Frances Payne Bolton School of Nursing and avid organic gardener.

The worms will convert plant matter into rich compost and “a liquid tea” that leaches through the layers of soil to produce a nutrient-rich organic fertilizer.

“We should have enough liquid tea from the worms to put into the irrigation system and feed everything we grow,” Bond said.

The green brain (formerly the chicken barn) is getting an aquaponic growing room of plants and fish.

In the future, Bond plans to introduce tilapia fish in the current hydroponic (water) growing system to create the new environment.  The fish and plants develop a symbiotic relationship that benefits both, he said. The fish thrive on the plant material, and the plants benefit from the nutrients left by the fish. And as fish grow, they can be harvested as food.

Also, if you are looking for farm products, visit the campus bookstore for plants, books and other nonperishable items (like dried herbs). Bon Appetit Management Co. also is selling farm plants at Tomlinson Hall’s cafeteria, and other locations will follow.