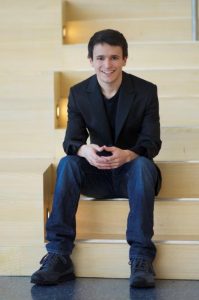 Case Western Reserve University undergraduate student Khalid “Cal” Al-Dhubaib will compete this spring for the title of 2015 Global Student Entrepreneur of the Year for founding a company to help doctors care for patients with chronic illnesses.

The winner of the competition in Washington, D.C., April 15-17, will be awarded $20,000. But more important to Al-Dhubaib is the chance for his startup company, Triple Analytics LLC, to gain wide-ranging recognition.

Al-Dhubaib, a senior computational neuroscience major from Saudi Arabia, qualified for the competition by being named one of two runners-up at the first U.S. national competition of the Alexandria, Va.-based Entrepreneurs’ Organization (EO) in late November. The upcoming event features presentations by student entrepreneurs internationally.

The competitors will present their ideas before a panel of judges who are EO members and seasoned entrepreneurs themselves. The judges represent a variety of companies.

“This competition is exciting because of the exposure and the networking,” he said. “Really, just being there will be winning.”

Triple Analytics leverages big data in electronic medical record systems to help clinicians personalize care by comparing the outcomes of interventions on patients with similar medical histories, Al-Dhubaib said. The company’s process is beneficial, especially for any patient with a chronic illness, because it is depends on the experiences of many health care providers.

“There’s this concept in business called the triple aim. It’s an elusive objective,” said Al-Dhubaib. “You are trying to create solutions that improve individual quality of care and overall population health while still reducing the cost of care. A lot of solutions tend to focus on one of those three.”

His company plans to take on all three aims—thus, the name of his enterprise first presented at Case Western Reserve’s annual Research ShowCASE last April. Al-Dhubaib, 23, decided to turn his idea into a company with guidance from the university’s Blackstone LaunchPad program.

Blackstone LaunchPad, with funding from the Blackstone Charitable Foundation and the Burton D. Morgan Foundation, is an initiative that gives university students and alumni the skills, knowledge and counseling they need to start new ventures.

At the global competition, he will get a chance to convince judges that Triple Analytics is needed as “a more powerful way of practicing evidence-based care.”