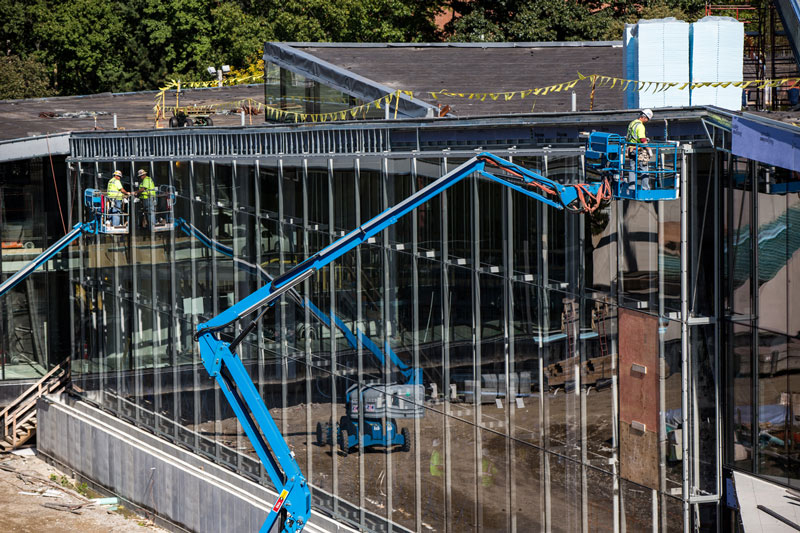 Within hours of a May 2012 groundbreaking, construction crews swarmed the future site of the Tinkham Veale University Center to begin digging its foundation. The activity has barely slowed since, but as of this month, it at least has grown quieter.

Sixteen months after work began, the exterior of the university center became completely enclosed Oct. 14, a development that signals the beginning of the building’s “final touches” such as painting and carpeting.

The project continues to be on schedule, and is expected to be open in time for the start of the 2014-2015 academic year next August, according to Stephen Campbell, vice president for campus planning and facilities management.

“We’re hugely grateful for the forbearance of students, faculty and staff during the construction phase,” Campbell said. “I know it hasn’t been easy … but, once it opens, I think it’s going to be even better than people ever imagined.”

At the heart of the excitement—and the building—is a two-story, high-tech wall located near the south entry. Designed by Local Projects, the interactive media design firm behind the widely admired touchscreen art installation at Gallery One in the Cleveland Museum of Art, the wall may feature anything from information about upcoming events to interactive games for students, faculty and staff to play together. Local Projects is working with members of the campus community to develop and design the wall.

“The goal of the media wall is to be informational and inspirational,” Campbell said. “As we held focus groups for the design of the building, one of the things that came out was the sense of how students feel about the culture of Case Western Reserve—and technology was always a piece of that. We wanted to bring that feeling into this new building.”

The university center’s dining options will be another major draw. Bon Appetit Management Co. will operate the four foodservice venues: a coffee shop, a pasta-focused station, an upscale bar/restaurant and a yet-to-be-announced sandwich shop..

The Tinkham Veale University Center also will offer a large event space for the campus community, accommodating up to 750 people for lectures and 450 for dining events. The 7,000-square-foot ballroom will be available for student events or other rentals. There also will be space for about 150 student organizations. 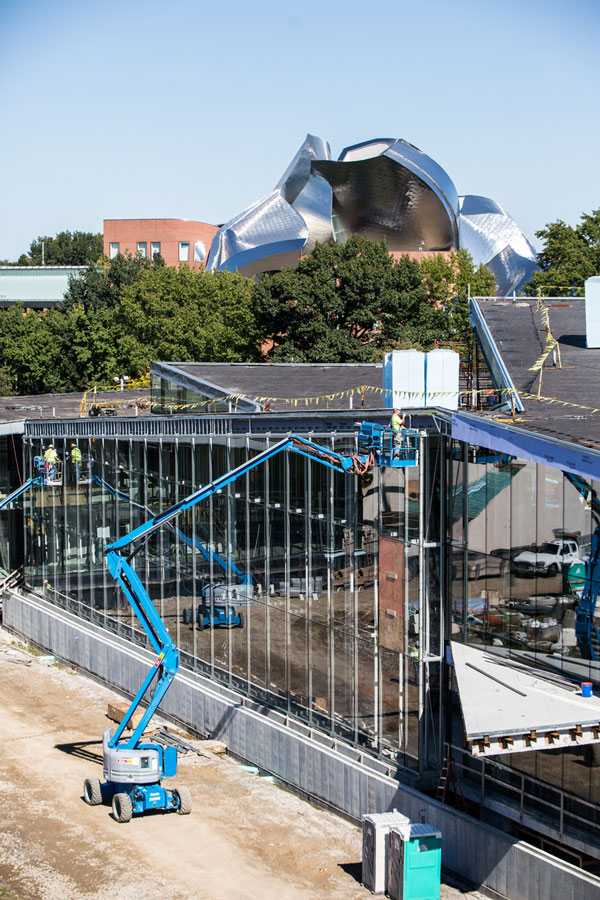 At the moment, most partitions on the 82,000-square-foot building are in place, and the entire building is dry walled. The building “envelope” was closed in this month, and the electricity and heat now are on—allowing workers to continue with interior finishes, such as painting and carpeting.

Construction is expected to finish in April, when the university center will have a “soft opening.” After, new building occupants—including the LGBT Center, Flora Stone Mather Center for Women, Inamori International Center for Ethics and Excellence, food-service venues and more—will begin a phased move-in approach.

“It’s going to be delivered as promised—on time and on budget,” Campbell said. “We’re really excited about the variety of spaces in the building and to see how students and the campus community use it.”

At the end of construction phase, Freiberger Field will return to its status as a recreational sports field, and the Severance Hall parking garage entrance on Bellflower Road will reopen.

Global architecture firm Perkins + Will designed the building, which students can walk through as they move from one side of campus to the other. The building may seem oddly shaped—“a starfish with a bite taken out of it,” as Plain Dealer architecture writer Steve Litt once described it—but the design aimed to take advantage of available space. Such a massive structure could not be built atop the underground parking garage that serves the university and Severance Hall, nor did university administrators want to remove buildings from campus.

Members of the campus community have been involved throughout the entire process, with students serving on the architect-selection committee and offering ongoing feedback on the design and contents of the space. Faculty and staff members also have served in similar roles, providing input and guidance to ensure the university center meets the goal of unifying the entire campus.

“This project really shifts the center of gravity from the Case Quad to north of Euclid Avenue, as the university’s master plan intended,” Campbell said. “We’ll provide a better link between the east and west side of campus and create a new center of the university.”