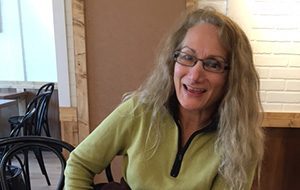 Denise Caterinacci has an early childhood memory of wondering why the United States did not have a king. She recalls hearing her Italian grandparents, who immigrated to Cleveland in the early 1900’s, talk about monarchies who ruled their native country.

Raised in a household bustling with visits by extended family and friends from Italy, Caterinacci could not help absorbing their manners, language, and traditions—even if in those years she was unaware what surrounded her was “Italian.” She has since made a career of her appetite to delve deeper into the culture and history of her ancestors—and share this knowledge with others.

For the past nine years, that desire has driven Caterinacci to help bring a public festival to Cleveland that imports one of Italy’s most influential artistic contributions of the last century—cinema.

“There’s always great beauty and visual aspects that carry forward traditions of Italian art. Starting with superior cinematography, Italian cinema has its own language,” said Caterinacci, a senior instructor of Italian at Case Western Reserve, who has taught at the university since 1989.

All films in this year’s Italian Film Festival USA – Cleveland were chosen for how they captured—and reflect—the spirit of modern Italy.

“We pick films that show sides of Italy that American audiences might not otherwise see—whether it’s diving into the psyche of the culture or taking us to a new setting,” said Caterinacci.

“In modern cinema, there’s a certain introspection: a self-criticism of Italy’s direction, politics, lifestyle and values; yet, their comedies tend to be quite recognizable for their lightness and zany tone,” she added. “The comedy tends to blanket a much more serious theme.”

All films are free, shown in Italian with English subtitles and are screened at Strosacker Auditorium on the Case Western Reserve campus and the Black Box Theatre at the Cuyahoga Community College-Metro Campus.

Last winter, Caterinacci took her love for Italian cinema even further, organizing a mini-series of movies, called “Italy Little Known: Personal Perspectives,” that brought all of the films’ directors to Cleveland to interact with audiences. 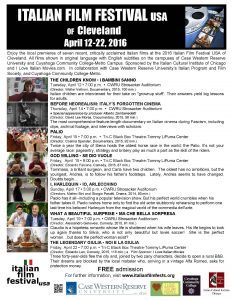 “In our country, we have a many mainstream perspectives on Italy that only represent part of the picture,” Caterinacci said. “These filmmakers showed an Italy that many people don’t know. It’s an incredibly diverse place.”

The distinctions in cultures (and takes on the language) among regions in Italy—a new republic born in 1948 from the unification of kingdoms and city-states in 1861—was apparent from an early age for Caterinacci: While her father’s family hailed from Abruzzo (in the central part of the country), her mother’s parents came from Veneto (in the northeast, where Venice is located).

“They were an interesting combination of unlike backgrounds,” she said. “Even as a little child, I could tell that, though both sets of grandparents were Italian, they were unalike.”

When not teaching (or watching films), Caterinacci travels to Italy as much as possible, sometimes taking students along for a study abroad program she playfully calls “Italian boot camp” with “a lot of good food along the way.”

Her experiences in Italy—studying in Florence at the Centro Linguistico Italiano and at the Università per Stranieri in Siena—led her to train executives and employees in Italian customs and language at several multi-national companies in Ohio, while also working as a voiceover artist for corporate training videos and other recordings and broadcasts.

“I feel lucky to have a passion that has opened up so many different opportunities,” said Caterinacci, who has won a number of teaching awards at Case Western Reserve, advises the CWRU chapter of Slow Food on Campus, as well as the Italian club La Dolce Vita (The Sweet Life). “I still find Italy and its culture fascinating.”

Before you go check out films at the Italian Film Festival USA – Cleveland, get to know Caterinacci a little better in this week’s five questions.

1. What is your proudest accomplishment?

What we do propagating Italian, how we’ve kept it unique here at Case [Western Reserve]—we don’t try to follow along with what others are doing other places. We have the program that we want.

2. If you could do anything you wanted for a day, what would you do?

Sit and taste every possible gelato flavor with no one telling me not to. It’s all about flavors. When I’m in Italy, I go for the darkest chocolate. My all-time favorite is hazelnut. I’m lucky I don’t have a nut allergy. 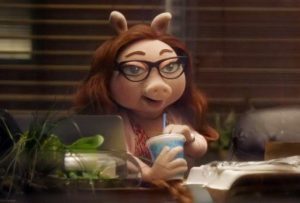 3. Who would you want to play you in a movie of your life?

One of the new Muppets. She wears glasses like me. Can you guess her name? It’s Denise—she can pull it off.

4. If you could go back in time and tell your childhood self something, what would you say?

Don’t give up math. [laughs.] I used to be good at it. And then, I wish I had always stayed as close to animals as I am now. Our cats and dogs growing up were very special, and I’ve had a number of them since then. I have two dogs now.

In my immediate environment, around my office on the second floor of Guilford House, I don’t have to leave the building to have contact with people from all over the world. It’s an eclectic atmosphere, and it’s accepted and celebrated.