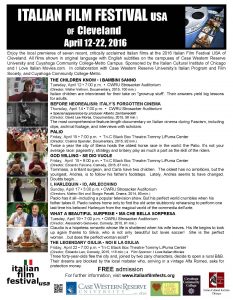 Cleveland will be one of 27 host cities for 12th annual Italian Film Festival USA, with Case Western Reserve University’s Strosacker Auditorium as one of the venues.

The festival will feature seven films in their original languages with English subtitles.

Admission is free for all films.

Learn more about the festival at italianfilmfests.org.

Description: “Italian children are interviewed for their take on ‘grownup stuff.’ Their answers yield big lessons for adults.”

Description: “The most comprehensive feature-length documentary on Italian cinema during Fascism, including clips, archival footage and interviews with scholars.”

Description: “Twice a year the city of Siena hosts the oldest horse race in the world: the Palio. It’s not your average race: pageantry, strategy and bribery play as much a part as the skill of the riders.”

Description: “Tommaso, a brillant surgeon, and Carla have two children. The oldest has no ambitions, but the youngest, Andrea, is to follow his father’s footsteps. Lately, Andrea seems to have changed. Doubts begin…”

Description: “Paolo has it all—including a popular television show. But his perfect world crumbles when his father takes ill. Paolo rushes home only to find the old actor stubbornly rehearsing to perform one last time his beloved Harlequin from the magical world of the commedia dell’arte.”

Description: “Claudio is a hopeless romantic whose life is shattered when his wife leaves. His life begins to look up again thanks to Silvia, who is not only beautiful but loves soccer. She is the perfect woman…but does the perfect woman exist?”

Description: “Three 40-year-olds flee the city and, joined by two zany characters, decide to open a rural B&B. Their dreams are blocked by the local mobster who, arriving in a vintage Alfa Romeo, asks for protection money.”