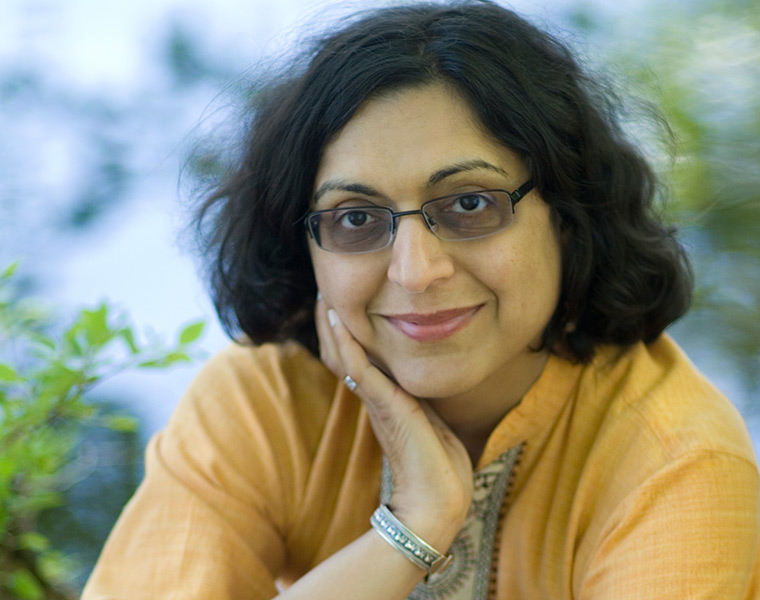 In just a matter of moments, the idea for Thrity Umrigar’s latest novel, Everybody’s Son, raced through her mind; the plot and characters took form instantly.

It was during the waning years of President Barack Obama’s tenure and the start of the Black Lives Matter Movement—real-world events that likely “affected and influenced the ‘flash’ in which the novel appeared before me,” said Umrigar, a professor of English who joined the Case Western Reserve faculty 15 years ago.

The novel—published in June by Harper Collins—follows the life of Anton, a black child whose mother leaves him alone in an apartment for a week. Police discover the boy covered in blood, having broken through a window, and his mother is found in a nearby crack house. Despite a strong bond between mother and son, Anton is placed in the foster care system and eventually adopted by a prominent—and grieving—white family. Only as an adult does Anton discover the morally complex situations surrounding his adoption.

Similar to Umrigar’s other novels, the book explores privilege and power. She also takes inspiration from playwright and screenwriter Tony Kushner’s saying that “hope is a moral obligation”—everyone needs some sense of hope in order to survive.

“I don’t believe in imparting ‘lessons’ from my novels, but I would hope that my books do what all literature attempts to do: to make readers draw connections between their lives and the lives of others, to elicit compassion and understanding about choices that others make, to encourage us to soften our hearts a bit,” she said.

This is Umrigar’s seventh novel—and her first to be absent any Indian characters. In much of her writing, Umrigar draws upon her strong ties to India, where she lived until she moved to the United States at age 21 (without ever visiting the country).

In her debut novel, Bombay Time, Umrigar made a name for herself as “an accomplished, natural storyteller,” according to Publishers Weekly, as she explored issues such as poverty and culture in her home city. Years later, her national bestseller, The Space Between Us, delved into gender and class roles. She’s also written a memoir, First Darling in the Morning, and a children’s picture book, When I Carried You In My Belly.

“But more than the good reviews, what has really been gratifying is the response I’ve received from readers, during my book tour and via email,” she said.

After all, for Umrigar, hearing from a reader about how one of her books has made a difference in his or her life is among the most rewarding moments for her as a writer. And as a professor, Umrigar finds the most gratifying experiences largely reflect that same theme.

“I’ve always thought of education and novel writing as two sides of the same coin, and I wanted to impart some of my knowledge to students,” she said. “Even more than teaching them the techniques of writing, I wanted to demonstrate my passion for language and literature, in the hopes of igniting a similar passion in them, no matter what their chosen field.”

Umrigar’s enthusiasm for writing was sparked at an early age; she has fond memories of sitting on her balcony in Bombay, reading and writing poems and short stories.

And now, she considers her motivation to continue writing “the same force that drives me to continue breathing. Writing is the way I feel alive and it allows me to organize the world for myself.”

Learn more about Umrigar in this week’s five questions.

1. What’s your favorite place in Cleveland?

Edgewater Park [near] Lakewood. You have a beautiful grassy area with walking trails, a small beach overlooking the mighty Lake Erie and a view of downtown. And as a bonus, you run into friendly people walking their beautiful dogs.

2. If you could have any superpower, what would you pick?

The superpower to sing. Yes, I know that’s not a traditional superpower (an oxymoron?) but if you heard my singing voice, you would know why I would consider that to be a miraculous superpower.

On a more serious note, I think all of us have superpowers. The surgeon who saves lives has superpowers. The teacher who educates young minds is a superhero. The young person who smiles at a homeless person and maybe buys him or her a sandwich, sprinkles magic dust on that person. I think the greatest superpower is the ability to find magic and meaning in ordinary, everyday life and objects. Anybody can admire a diamond—where’s the power in that? But to be able to see the beauty in an ordinary rock or stone—that takes superpowers. And by the way, literature is a way to sharpen and hone that ability.

3. When you were younger, what did you want to be when you grew up?

I wanted to be exactly what I ended up being—a writer. How lucky is that?

4. Throughout all of your schooling, what was the most important lesson you ever learned?

To find something you love, to do that thing for a living, and to do it well, to the best of your ability.

The people, of course. I adore my students, love my colleagues and feel tremendous respect and gratitude for the people who make this university run as seamlessly as it does—the janitorial crew, the landscapers, the support staff.

And my God, what a beautiful campus we have. Often, when I enter Guilford House, I take in the trees and the flowers and the beautiful brick buildings around me and find myself whispering a “thank you” to whatever benevolent force brought me to this university.