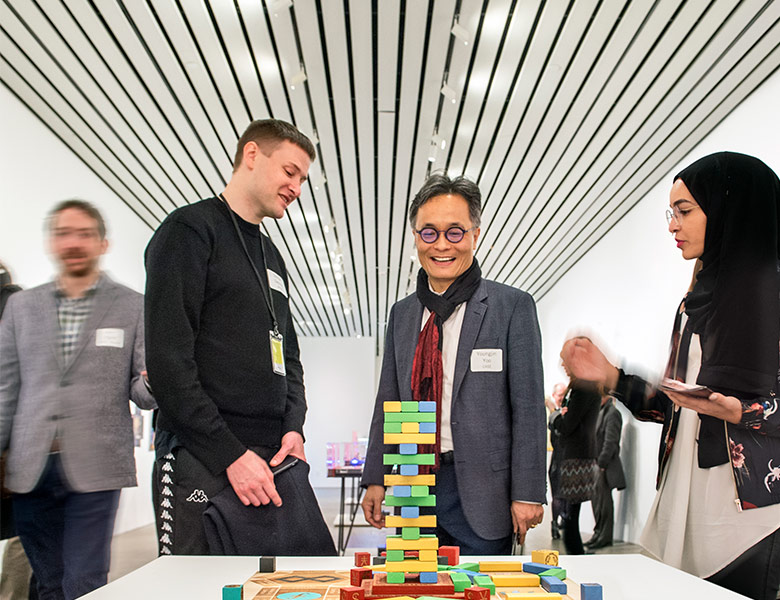 What will the future be like? Student-created board games take a crack

New games—now on display at MOCA—explore what’s next in health care, transportation and finance 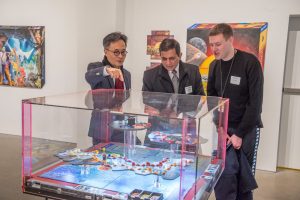 From left: Professor Youngjin Yoo; Manoj Malhotra, dean of the Weatherhead School of Management; and artist Simon Denny at the opening of The Founder’s Paradox

Just as playing Monopoly helps illustrate real estate and business basics, new board games—co-created by students in Case Western Reserve University’s MBA program and from the Cleveland Institute of Art (CIA)—entertain the future workings of industries that affect everyone: health care, finance and transportation.

On display at the Museum of Contemporary Art Cleveland (MOCA) until June 10 as part of a new exhibit—The Founder’s Paradox, by Simon Denny, a contemporary artist from New Zealand—the board games accompany his artworks that explore the nexus of existing industries and new technologies, such as cryptocurrencies and augmented reality.

“The visual language of board games helps us understand the rules and forces—within and outside our control—that may govern the future,” said Youngjin Yoo, the Elizabeth M. and William C. Treuhaft Professorship in Entrepreneurship at the Weatherhead School of Management at Case Western Reserve. “We also hope they’re fun to play.” 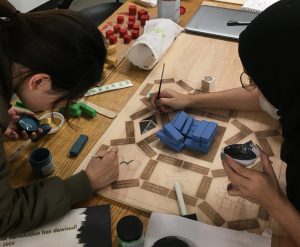 Teams of students researched and designed the games last fall during a seminar led by Yoo and Denny, who collaborated with the class by video chat from his studio in Germany and an in-person visit to the neighboring campuses of CWRU, CIA and MOCA in University Circle.

The games were then brought to life, with students fabricating all the pieces, packaging and rule books at the Larry Sears and Sally Zlotnick Sears think[box], the university’s 50,000-square-foot makerspace.

The class was co-taught by CIA adjunct professor Patrick Barrett.

“If these games provoke and encourage dialogue about these issues,” Yoo said, “then our designs will have succeeded.”

Players battle to gain market share, each one representing a slice of the future transportation pie, such as ride sharing (Uber, Lyft), a traditional model of individual ownership (General Motors, Ford), and public transportation. 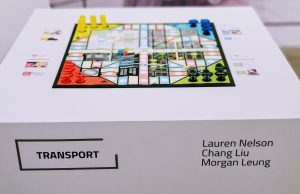 Trying to reach the finish line first—aka, market domination—players draw “event” cards that indicate socio-cultural-economic changes that either move players into the future or the past, based on how these scenarios affect the reality of their sector.

“This kind of future-scenario building is essential to businesses looking to stay competitive while navigating the many known and unknown challenges and opportunities,” said Lauren Nelson, a second-year MBA student who will begin working in design and innovation with Goodyear after graduating in May.

Cryptocurrencies—invented in the wake of the 2008 financial crisis—allow for the movement of money through public ledgers, known as blockchains. Some see them as a way to eventually dismantle the existing financial industry. 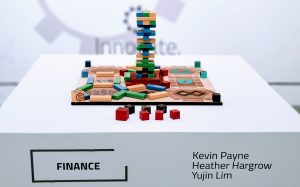 While traditional banks use centralized and confidential methods to manage capital, cryptocurrencies—such as Ethereum-run decentralized applications (often abbreviated as “DApps”)—reveal every transaction.

In the board game DApp Tycoon, players are either the “corporate elite” and control the majority of resources, or they’re fighting for the adoption of blockchain technology.

In the middle of the gaming board stands a tower constructed from blocks of different colors that indicate types of capital (blue: human capital, yellow: social capital, etc.).

Based on dice rolls, blocks are either taken from the tower—which helps the DApps—or are stacked on top, making it taller, which helps the corporate elite maintain the status quo. 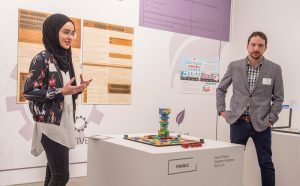 If either side is too aggressive, the tower (similar to Jenga) becomes more precarious as its structure is redistributed. The game ends when either side controls all resources—or the tower (and therefore, society) collapses.

“The complexity of this topic may overwhelm people,” said Kevin Payne, a second-year MBA student. “We tried to physically represent an issue that may come to play a huge role in our lives.”

After graduating, Payne will work for BrownFlynn, a corporate sustainability and governance consulting firm in Cleveland. 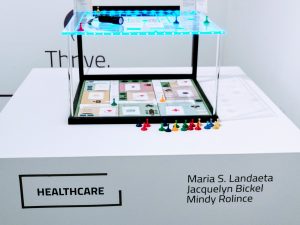 Trying to mimic real-life situations in the national health care system, Sanitopia places players (medical patients) on two tiers: the privileged elites play up top and receive better care, while the rest of the population plays at the bottom and receive minimal care.

The point of the game is to survive—and have some money left.

Players pick cards that influence their fate and traverse the game’s two tiers with luck or a lack of it. The game also weaves in elements of augmented reality, which may help bridge the gap of health care quality in the future.

“We wanted to mimic how people don’t get to choose where they’re born or many aspects of their own health,” said Maria Schenone-Landaeta, a second-year student in the full-time MBA program. “We hope the result of our project can provoke discussion and curiosity about the issues of our current healthcare system ”

All photos by Rob Muller, for CIA

This article was originally published March 1, 2018.