Where are they now? Career Center’s survey gives post-graduation report for Class of 2013 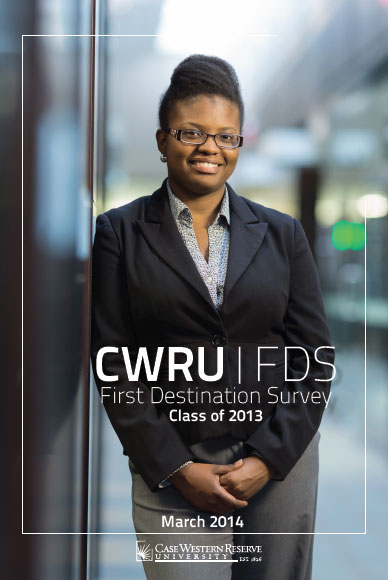 In recent years, the job market has been grim for many college graduates, with the Federal Reserve Bank of New York reporting earlier this year that 44 percent of new college graduates were underemployed—or in jobs that did not aptly use their degrees—and up to 8 percent were unemployed, depending on major.

But, according to Case Western Reserve’s First Destination Survey, 46 percent of 2013 graduates were employed full time—74 percent of whom reported their jobs required college degrees and were related to their fields of study—while 42 percent sought advanced degrees. Five percent were available for employment, while 7 percent pursued other opportunities.

The annual study sought data from 871 graduating seniors; overall, post-graduation data was collected for nearly 80 percent of the Class of 2013 (684 graduates).

“It’s really one of the most interesting reports that we’ve seen in a number of years, and I think a part of that is our students are doing really interesting, exciting and relevant things by way of graduate and professional school studies as well as starting their careers,” said Tom Matthews, executive director of the Career Center. “Our students are being very broadly educated, and I think that affords them a greater myriad of opportunities.”

Just where are these young alums starting out? Some organizations hired multiple Case Western Reserve graduates, including:

Overall, 34 percent of graduates who are employed full time are in engineering, 12 percent in information technology and 9 percent in nursing.

“Students continue to make career decisions based on their values,” Matthews said, noting a large increase in hiring by Teach for America and a steady stream of graduates entering the Peace Corps.

Two-thirds found careers in the Midwest, while 12 percent headed south, 11 percent to the Northeast and 9 percent to the West. Two percent are working internationally.

Salary data by major is provided in full in the online report.

More than 280 students were pursuing graduate/professional degrees at a variety of schools across the country, such as:

Plus, 39 percent of alumni continuing on to graduate school chose to study at Case Western Reserve.

Many are pursuing these degrees with significant scholarship support, earning Fulbright and Gates Cambridge awards as well as the National Defense Science and Engineering Graduate Fellowship, the National Science Foundation Graduate Research Fellowship and more.

Whether heading to full-time careers or full-time education, the majority of Class of 2013 alumni noted the experiential learning opportunities—including faculty-led research, internships, practicums or community service—at Case Western Reserve helped prepare them for life beyond campus.

Further, the recent alumni noted these experiences helped them most improve:

All nursing students completed an experiential learning activity, followed by 97 percent of engineering majors, 96 percent of arts and sciences majors, and 92 percent of management students.

Matthews said students today tend to start these experiential learning activities earlier—some even in high school—so they are arriving on campus “savvier” about internships and other opportunities than those five or 10 years ago.

Plus, they’re seeking help right away. Matthews said that on the first day of classes at the start of the 2013-14 academic year, there was a line extending out the Career Center door. “We’ve never had that before,” he said. “And interestingly enough, a lot of them were first-year students. Their first day of their first semester on campus, they were here, ready to prepare for internships and their careers.”

To learn more about services offered at the Career Center, visit students.case.edu/careers.

For more information on the study, or to read the report in detail, download the PDF.