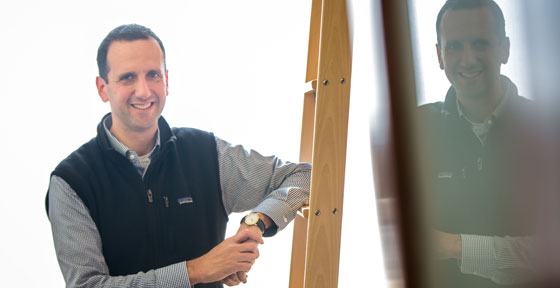 President Barbara R. Snyder and Provost Ben Vinson III today announced the appointment of the Weatherhead School of Management’s Michael Goldberg as the inaugural executive director of the university’s Veale Institute for Entrepreneurship.

“Michael’s international experience as a business leader and venture capitalist has made him an exceptionally effective and popular teacher over the past decade,” President Snyder said. “We are delighted that he now will be applying his knowledge and networks to developing the Veale Institute into a national leader.”

Launched through support from the Veale Foundation, the institute will serve as Case Western Reserve’s preeminent hub for entrepreneurship—leading its own programming and activities while also working with individual schools and campus organizations. The institute also will serve as an entry point for those beyond the campus who want to learn more about the university’s initiatives, which include academic offerings and extracurricular activities as well as product and business development.

“The entrepreneurial activities that have evolved here are truly exceptional,” Provost Vinson said. “The Veale Institute gives us an opportunity to build upon these many individual strengths to create a more vibrant and coordinated ecosystem that engages and inspires the entire campus.”

Goldberg spent the second half of 2019 as one of two faculty advisors for the institute—the other was Scott Shane, the A. Malachi Mixon III, Professor of Entrepreneurial Studies—during the interim leadership of Northeast Ohio native and Silicon Valley investment banker Todd Schwarzinger. Goldberg, who also grew up in the region, has taught entrepreneurship at Weatherhead for the past decade—first as an adjunct faculty member and most recently as an associate professor. For the past 15 years he has served as managing partner of a venture capital firm that invests in Israeli medical device companies that have synergies with Northeast Ohio institutions involved in health care.

A graduate of Princeton University who majored in public and international affairs, Goldberg went on to earn an MBA from the University of Pennsylvania, as well as a master’s degree in international relations from Johns Hopkins University. He has taught entrepreneurship at universities in Spain, Greece, Vietnam, Namibia and Turkey, and in 2014 launched Beyond Silicon Valley, a Massive Open Online Course (MOOC) on Coursera. The course has drawn tens of thousands of students from 190 countries; it also led to a book of the same name. The Burton D. Morgan Foundation—which also supports CWRU LaunchNET and the law school’s Intellectual Property Venture Clinic, among several other initiatives—funded development of the course and book.

“I am humbled to lead an institute that bears the name of Tinkham Veale II, an alumnus and business leader whose gifts to Case Western Reserve have helped transform the campus and supported student learning and faculty research,” Goldberg said. “We are committed to making the Veale Institute for Entrepreneurship a place of such dynamism and innovation that those on and off campus see it as a beacon of creative and strategic opportunity.”