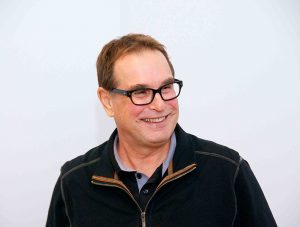 Case Western Reserve University has honored David L. Cooperrider, a global expert on Appreciative Inquiry (AI) and a faculty member at Weatherhead School of Management, as a Distinguished University Professor, a title that acknowledges the outstanding contributions of full-time, tenured professors with a distinguished academic record of extraordinary research, scholarship, teaching and service.

Cooperrider, the Fairmount Santrol-David L. Cooperrider Professor of Appreciative Inquiry at the Weatherhead School, has guided the wide acceptance of AI, his strengths-based management technique now widely practiced in business, public service organizations and governments. AI’s impact on management and world affairs—as recognized by the United Nations—stems from its ability to enable innovation, sustainable design and transformative change.

Cooperrider will be honored as one of four new Distinguished University Professors during Fall Convocation on Wednesday, Aug. 31, at 4:30 p.m. at Severance Hall.

“I have been fortunate to personally see David in his element and experience his many qualities and accomplishments,” Weatherhead School Dean Robert E. Widing, the Albert J. Weatherhead III Professor of Management, wrote in a nomination letter. “It has been an honor to see first-hand his generosity of spirit, his capacity to inspire and bring out the best in others, his deep and far-ranging intellect and his ability to synergize multiple complex projects aimed at enriching humanity.”

Cooperrider was humbled by the honor, and, of course, appreciative.

“I’m so grateful to Case Western Reserve for the unique community we have here and for the colleagueship,” he said. “This has been an incredible place to nurture the ideas of Appreciative Inquiry and all the work that has gone into the idea of business as an agent of world benefit.”

Cooperrider has been a leader in changing the mindset of managers to the belief that businesses can excel, people can thrive and nature can flourish. At the Weatherhead School, he is faculty founder of the Fowler Center for Business as an Agent of World Benefit and co-director of the recently established Strategic Innovation Lab.

He fondly recalls arriving at the university in 1979 to pursue graduate studies, and then joining the faculty in 1985.

“It seems like I’ve been here since I was a kid, and I was drawn here by the courageous spirit of pioneering scholarship that continues today,” he said. “And I was blessed by CWRU mentors, thinkers and giants in our field such as Suresh Srivastva and Ron Fry and many others.”

“His pioneering research methodologies and practices are being applied to identify and implement solutions to global challenges,” Widing added, noting his efforts to address extreme poverty and promote emergence of abundant, clean and renewable energy.

Cooperrider has served as strategic adviser to a wide variety of businesses, such as Apple, Verizon, Johnson & Johnson, Fairmount Minerals and Green Mountain Coffee Roasters, as well as organizations such as American Red Cross, American Hospital Association, Cleveland Clinic, World Vision and the United Way.

Cooperrider has published 25 books and authored more than 100 articles and book chapters. His books include Appreciative Inquiry: A Positive Revolution in Change (with Diana Whitney); The Organization Dimensions of Global Change (with Jane Dutton); Organizational Courage and Executive Wisdom (with Suresh Srivastva) and the four-volume research series Advances in Appreciative Inquiry.

Champlain College’s Stiller School of Business in 2014 honored his AI work with an academic center in his name, the David L. Cooperrider Center for Appreciative Inquiry. Cooperrider serves as its honorary chair from his academic home base at Case Western Reserve. In 2010, Cooperrider was awarded the Peter F. Drucker Distinguished Fellow award from the Drucker School of Management, recognizing his contribution to management thought.