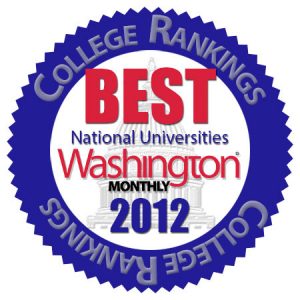 Case Western Reserve University retained its national top 10 position this year in Washington Monthly’s annual rankings of colleges that contribute to the best interests of students and the country.

Last year marked the first time the university broke into the magazine’s highest tier, leaping from 17th to seventh. For 2012, Case Western Reserve stayed in the same spot, while institutions such as Harvard and the University of Michigan fell out of the top 10. Also this year, Stanford University moved from fourth to third, and the University of North Carolina at Chapel Hill jumped from 12th to fourth.

Launched in 2005, Washington Monthly’s ratings focus on three primary criteria: research excellence, social mobility of students, and campus commitment to service. Case Western Reserve’s data placed it particularly high in service-related categories; for example, the university ranked sixth for the proportion of federal work-study funds that support service; seventh for the number of graduates serving in the Peace Corps relative to the size of the school; and eighth in a combined “service” ranking that considers figures for staff and courses centered on community service, among other factors.

In addition, the university earned high marks for supporting the social mobility of students, as 20 percent of students at Case Western Reserve receive Pell Grants.

Research efforts also placed the university among the top tier of national institutions, with the number of undergraduate students who eventually earn doctoral degrees ranking No. 14 in the country. Case Western Reserve faculty also were recognized, as the number of faculty members who have been accepted into the National Academies ranked No. 36 this year—a two-spot increase from last year’s rankings.

The top 10 national universities in Washington Monthly’s 2012 rankings are:

For more information, or to read the full article, visit washingtonmonthly.com/college_guide/.