War’s sounds, smells and sights are too familiar for CWRU 2013 grad 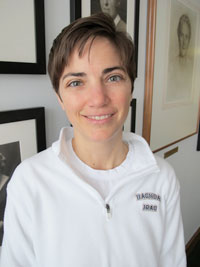 The sound of a helicopter triggers memories of wounded soldiers arriving at the military field hospital in Iraq for Paula Simpson, who graduates this summer from the Frances Payne Bolton School of Nursing at Case Western Reserve University.

“I was raised as a Jehovah’s Witness. So I never said the Pledge of Allegiance or knew the words to the Star Spangled Banner, but I wanted to be an Army nurse,” she said. “I felt a calling.”

The former chief wardmaster in Mosul, Iraq’s second-largest city, is a 16-year Army reservist from Brunswick, Ohio. Her perspective on nursing is one few of her 2013 graduating classmates will ever have.

“It’s a whole different world when bullets and mortars are flying overhead while you try to care for casualties,” she said.

Although she is eligible to walk in May’s graduation, Simpson leaves on a humanitarian mission to Panama with her Army Reserve unit to conduct wellness checks on mothers and children and screen for hypertension, diabetes and other health problems. So her graduation is in August.

Upon graduation, she hopes to become a critical care nurse and use some of the fast-thinking emergency skills she learned by treating people in distress. She also must fulfill four more years of service in the Reserves.

The non-traditional student, who graduated from Cloverleaf High School in 1990, has had many stops and starts on the way to a nursing degree.

Simpson joined the Reserves in 1997 after becoming a licensed practical nurse at Parma School of Practical Nursing. She was first called to serve when the Iraq war began in 2003 as the backup medical unit in case the purported weapons of mass destruction took out the first medical unit.

Her unit was trained and ready, but never sent. Again she was called up for service in 2004, and then she was stationed at Ft. Sill, Okla., where she earned an associate’s degree in science from Cameron University.

She returned to Cleveland in 2008, and two months later began undergraduate work at Case Western Reserve’s nursing school. Four semesters into the program, the call to serve in Iraq finally came.

Simpson ran the combat support hospital with the chief nurse on the forward operating base in Mosul that treated both friendly and enemy alike. She also left the semi-safety of the 15-foot-high concrete-walled compound to train the Kurdish and Iraqi army and police on how to handle emergency medical issues. She did it with the help of trusted translators and an armed guard who made sure to quell any unfriendly disputes that arose between the fighting groups in the room.

Whenever Simpson flew and did battlefield circulations to check how other combat support hospitals were doing, she wore 50 pounds of body armor and carried a weapon.

“It was a surreal world,” she said.

Her work was done in incredibly challenging conditions—under mortar fire, in sand storms combined with rain that dropped orange mud on just about everything they tried to keep sterile. And it was done in temperatures that often reached triple digits.

“It was so miserable at times that a slight breeze felt like sandpaper grinding across the skin,” she recalled.

Simpson served as operations were transferred from the Americans to the Iraqis. As an enlisted leader in a combat support hospital, she had to watch how every trucked-in drop of water, medicines, blood and hospital supplies were used. She recalled becoming a hoarder of food and supplies in case the plane or convoy didn’t make it to Mosul.

“As the war shut down, we had to do some forward-thinking about where food, water and medical supplies were coming from. We had to have enough to the bitter end,” she said.

Although operations were winding down for the Americans, Simpson said this was the deadliest time in Iraq since the surge. She was there during the “Day of Rage” that gave rise to the Arab Spring.

Many nights, Simpson rolled off her bed, counted to 15 to allow for the mortar showers to end and then ran to the bunker. Although she never went anywhere without her weapon, she always prayed she would never have to use it and, fortunately, never did.

Prior to deployment, soldiers have six months of combat and convoy training that armed her with survival skills. But, she said, that “never even comes close to realities of war.”

The hospital was a main target to wipe out the lifeline that saved lives and returned soldiers to combat. The hospital was located next to a major airfield, another target. To keep her sanity, Simpson and her coworkers woke up at 3:50 a.m. and worked out for two hours, then showered and started their 12-hour or longer days to return and repeat the process again the next day.

While closing down northern Iraq, the hardest part of those last days in the field was the lack of Internet or news from outside.

“I felt closed off from the world and alone,” she said.

Days became a blur as she operated under a combat mindset that focused on what was in front of her while keeping a 360-degree awareness of what was around her.

“I want people to know what a combat vet experiences and help raise an awareness in future nurses,” Simpson explained.

She suffers from PTSD with flashbacks and still does not know all the things that will trigger them. She is learning to cope through help from the Veterans Administration hospital.

“There is nothing beautiful or glamorous about it,” Simpson said, “but I feel proud of my service and all the tasks my hospital accomplished while in Iraq.”

Since returning, she credits the warm and compassionate faculty members and students at the nursing school who have done for her what nurses do—care for others.

The faculty welcomed the returning vet in January 2012, just two months after she arrived home, and offered her the nurturing she needed to complete her final semesters.

Simpson said their warmth helped her through some hard times as she transitioned from the “fight or flight” mode of combat to civilian life.

“It was quite the experience,” she said, “and I still don’t know all that I have learned from it.”

In time, she will.