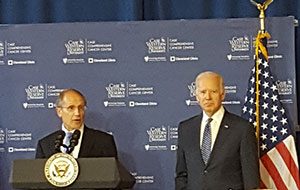 Speaking at his first visit to the city since he assumed leadership of the nation’s new Cancer Moonshot Initiative, Biden emphasized the complexity of a disease that takes hundreds of thousands of lives each year—including that of his own son, Beau, who died of brain cancer in 2015.

“There are more than 200 distinct types of cancer,” Biden said in remarks at the Langston Hughes Community Health and Education Center. “That’s what makes our job so particularly complicated.”

President Barack Obama announced the Cancer Moonshot in January as part of his final State of the Union address, and soon after committed an additional $1 billion to the effort over the next two fiscal years. On Wednesday, people in more than 270 communities came together across the country—including in Cleveland, at ideastream—to share experiences and ideas as part of Biden’s first national summit on the subject. The Case Comprehensive Cancer Center—which includes Case Western Reserve University, Cleveland Clinic and University Hospitals Seidman Cancer Center—cosponsored Northeast Ohio’s gathering.

At the same time, Case Comprehensive Cancer Center Director Stanton L. Gerson was among hundreds of researchers, oncologists and other care providers, data and technology experts, patients, families, and patient advocates, who gathered in Washington, D.C., to discuss prevention, therapeutic and diagnostic strategies with Biden and other federal officials.

“There was a passion and urgency and alignment in the room,” Gerson said Thursday when introducing Biden. “It was a remarkable experience.”

Gerson, also a professor of oncology and hematology at Case Western Reserve School of Medicine and director of University Hospitals Seidman Cancer Center, noted that Case Comprehensive Cancer Center members treat more than 65 percent of Northeast Ohio’s cancer patients, one of the highest rates of any of the nation’s 45 National Cancer Institute-designated comprehensive cancer centers.

“Our possibilities are unlimited for our region,” Gerson said.

Yet Gerson also cited initiatives beyond the state’s borders, including a collaboration between the cancer center’s Monica Webb Hooper and George Washington University’s Milken Institute School of Public Health to use social media and other forms of digital engagement to research additional ways to decrease smoking rates and increase proportions of residents who receive HPV (Human Papillomavirus) vaccinations. Gerson noted that collaboration emerged from conversations among him, Cleveland Clinic Taussig Cancer Institute Chairman Brian Bolwell, and Greg Simon, executive director of the moonshot effort.

“This will be an exciting project for us,” Gerson said, “and I am confident it will be a role model for many around the country.”

Biden also emphasized the importance of community outreach and intervention in preventing cancer, noting that researchers have well established the role of environmental factors in cancer cases. He cited the two vehicles he toured before his remarks: one, Cleveland Clinic’s mobile children’s unit, which is essentially an entire pediatric office on wheels, and the other Case Western Reserve School of Dental Medicine’s mobile dental van, which serves senior citizens and is made possible through support from the state of Ohio, the McGregor Foundation, the Dental Trade Alliance Foundation and others.

“We can reach more people by taking the screening to their communities,” Biden said.

The vice president also spoke at length about the importance of bringing technology and big data to the battle. The more that scientists can gather and analyze genetic and other information about cancer patients across the country, Biden said, the more they will be able to identify patterns and understand why certain treatments may work on some patients—and fail tragically for others. In addition, he explained, medicine now recognizes the importance of drawing together the talents of experts from multiple specialties, from immunology and genetic engineering to epidemiology and more.

The vice president is so committed to such collaboration that scientists who secure federal moonshot funding will be expected to make their results available to others. “You’ve got to share. If you don’t want to share, you don’t get the deal.”

Biden said he chose Cleveland as his first moonshot stop because of a conversation with Cleveland Clinic CEO and President Toby Cosgrove about some of the most advanced initiatives taking place here. Part of the mission of the moonshot is to develop and execute strategies that so accelerate progress that what once would have taken a decade now will require only five years.

On Thursday, Biden explained why he considered the speed of the work so important.

“How many people do you know who say: ‘Doc, can I just get one more month? I want to see my daughter get married.’ Or: ‘Can I get another eight months? My son is graduating from college and I just want to be there,’” Biden said. “Moments make a difference.”

He also praised Gerson for leading “one of the great cancer centers” in the nation. The Case Comprehensive Cancer Center includes more than 370 physicians and scientists, and its designation as a comprehensive cancer center is the highest the National Cancer Institute awards.

“Supporters and skeptics alike ask, ‘What’s the moonshot?’” Biden said. “The moonshot is all of you. It’s everything you are doing to protect and treat cancer.”