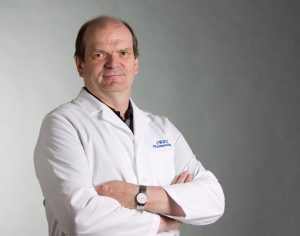 Krzysztof Palczewski, one of the world’s leading vision researchers and recipient of numerous international awards and universal peer respect, has been awarded the permanent title of Case Western Reserve University Distinguished University Professor.

Palczewski, the John H. Hord Professor and chair of the Department of Pharmacology at the School of Medicine, will be one of four faculty to formally receive the honor during fall convocation today (Aug. 31) in Severance Hall. The designation “acknowledges the outstanding contributions of full-time, tenured professors with a distinguished academic record of extraordinary research, scholarship, teaching and service.”

“To think that my wife Grazyna and I, two young immigrant researchers, could come to the United States with little money and work hard and achieve the American Dream is a remarkable chain of events for which I will be eternally grateful,” said the native of Poland and naturalized U.S. citizen. “The Distinguished University Professorship is especially meaningful because it comes from my home institution, with so many wonderful colleagues and students that I have met and worked with over the years.”

Palczewski, known by colleagues as “Kris,” came to Cleveland in 2005 after 13 years at the University of Washington in Seattle. He said he chose Case Western Reserve for its rich research legacy, including three Nobel Prize winners, in his field of pharmacology.

Molecular structure and its relationship to function has remained a theme throughout Palczewski’s career in research.

“I was attracted to chemistry in high school because I was fortunate to be able to visualize chemical substructures, including atoms, and the logic behind them,” he said. “Their elegance captivated me and inspired me to learn more.”

While the range of his research is extensive, Palczewski is best known for determining the structure of rhodopsin, a protein found in rods (one of two types of photoreceptors in the retina; the other being cones). Rhodopsin plays a central part in converting light into electrical signals, which are then transmitted to the brain for interpretation as the people and objects that we see.

Determining rhodopsin’s structure was important on many levels. The discovery added enormously to basic understanding of how the eye functions and is paving the way for developing medications for treating assorted forms of blindness. And, for the first time, the finding presented a complete structural portrait of G-protein coupled receptors (GPCRs), highly versatile proteins—there are nearly a thousand—that transmit information between and within cells. GPCRs also play a part in all major life processes, from breathing to eating and walking, from hormone action to neurotransmission. They represent the target molecules for about half of all drugs on the market. Understanding how GPCRs are arranged is helping to improve these medications and identify new ones.

The rhodopsin work caught the attention of researchers worldwide. Respected Belgian scientist Gilbert Vassart said that, in addition to the two worthy recipients of the 2012 Nobel Prize in Chemistry, he would have also awarded the prize to Palczewski for uncovering the protein’s structure.

In another important contribution, Palczewski has found that a simple drug treatment, currently in trials, can arrest vision loss in people with until-now incurable genetic retinal degeneration.