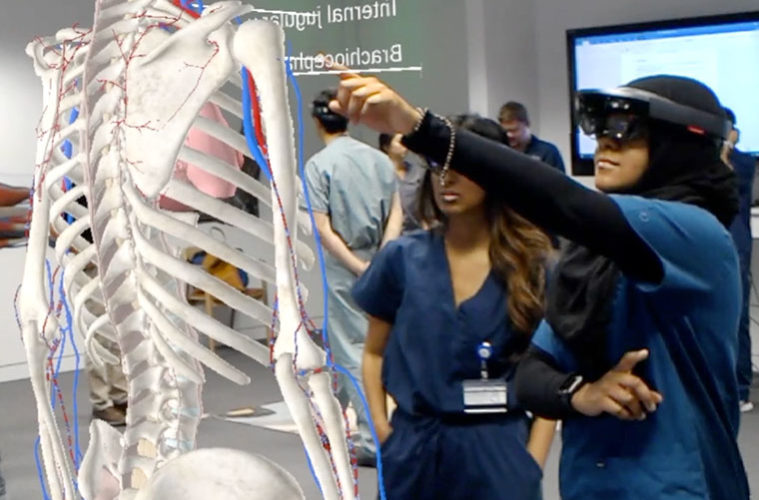 University’s HoloAnatomy spreads to other campuses

Case Western Reserve University announced today that Northwestern University and three other academic institutions have committed to using HoloAnatomy® software in the preparation of future health care providers, while the University of Oxford has signed a formal letter of intent to do the same.

The study—which was published online in the journal Medical Science Educator––also found that students using HoloAnatomy® required 40% less classroom time to cover the required learning than those doing dissection.

“From the very first moment we put on a HoloLens headset, we recognized the transformative potential of this mixed-reality technology,” said Mark Griswold, a professor of radiology who is one of the faculty leaders for the HoloAnatomy® project. “This research helps confirm our confidence in the approach, as does the engagement of institutions like Northwestern and Oxford.”

Griswold and other Case Western Reserve colleagues were the first from any university to learn of the technology, then still under development at Microsoft. The opportunity arose in 2014, as leaders of the university and Cleveland Clinic were in the initial planning process for what would become the Health Education Campus (HEC), a state-of-the-art project designed for students from the university’s dental, nursing and medical schools-–including the Cleveland Clinic Lerner College of Medicine—to learn, study and otherwise interact with one another.

Since that time, an interdisciplinary team of faculty, programmers, biomedical illustrators and other staff have collaborated to develop a complete suite of all of the organs, vessels and systems that comprise human anatomy. As part of those efforts, faculty have repeatedly piloted elements of the software with medical students to assess its effectiveness. With the opening of the HEC late last spring, all first- and second-year medical students have participated in lessons using the program.

“When you put the glasses on,” first-year student Madeline McCabe said of the HoloLens visor, “all of a sudden it was so clear to understand the human body.”

Another benefit of the mixed-reality approach is that faculty and students can see one another interacting with the holograms. This feature allows professors to help direct students in focusing on the right area of the anatomical image, and students to assist their classmates as they learn together.

Oxford’s Director of Human Anatomy Thomas D. Cosker said his institution intends to use HoloAnatomy® throughout medical students’ time at the university—both during instructional time with faculty and also as they learn and study on their own.

“Hololens is a superb innovation,” Cosker explained. “It brings textbooks and the written word to life, [and] it allows students to immerse themselves in an interactive learning environment.”

California Health Sciences University (CHSU) was the first academic institution to announce its plans to use the HoloAnatomy® software in educating students in its new Doctor of Osteopathic Medicine program, which enrolls its first class this fall.

“[The holographic-based] curriculum will revolutionize how students learn, enhancing their interactions during both simulated and real patient cases,” Leslie Catron, the college’s simulation center manager explained at the time of CHSU’s announcement. “Students can use holograms to easily separate and enlarge small organs and functions, giving them access to body systems like never before.”

New York’s Finger Lakes Community College (FLCC) began piloting Case Western Reserve’s software two years ago, and found that students using the university’s program scored higher on exams than those in traditional classes using textbooks and plastic models. The collaboration began after FLCC biology professor Christine Parker learned about the technology and then saw it in action with Griswold’s team in Cleveland.

“We are proud of Professor Parker’s initiative and dedication to the continual improvement of the student experience,” the college’s president, Robert Nye, said at the time of FLCC’s announcement. “HoloAnatomy® is another tool that we hope will make science more accessible and engaging for our students.”