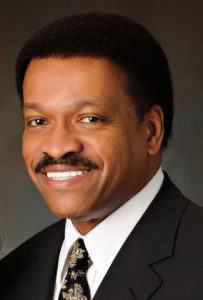 President Barbara R. Snyder announced today that a 1979 alumnus of the School of Dental Medicine will become its next dean July 1.

Kenneth B. Chance, Sr., a professor and chief of endodontics at the University of Kentucky, will succeed longtime dental school leader Jerry Goldberg this summer after a comprehensive national search. A member of Case Western Reserve’s Board of Trustees since 2005, he will resign his seat later this month.

“I am excited and honored by the opportunity to return to this campus at a pivotal time for the school and for health care nationally,” Chance said. “Jerry’s tenure has been transformative, and I look forward to building on his legacy and accelerating our momentum.”

Chance earned his undergraduate degree at Fordham University. After earning his DDS at Case Western Reserve, he  completed a general practice residency at Jamaica Hospital in Jamaica, N.Y., followed by an endodontic postgraduate residency at the University of Medicine and Dentistry in New Jersey (UMDNJ, now part of Rutgers University).

Chance spent the next decade and a half at UMDNJ, honing skills in his specialty, earning tenure, and developing deep expertise in the federal politics and policies involving health care. In the early 1990s, he worked closely with then-New Jersey Sen. Frank Lautenberg as a health policy fellow of the Robert Wood Johnson Foundation; Chance went on to serve as a health adviser to Lautenberg through 2000, and also spent four years as a federal relations adviser to UMDNJ’s Office of Government and Public Affairs. He served on the board of the Robert Wood Johnson Foundation Health Policy Fellowship Programs for six years. In 1992, he helped establish the health policy program at the Joint Center for Political and Economic Studies, a research and policy organization that tackles national issues with a particular focus on their impact on African-Americans. Chance served as chairman of the Governor’s Oral Health Policy 2000 Advisory Committee for New Jersey, and member of the Institute of Medicine Committee on National Institutes of Health Research Priority Setting Process.

In 1997, Chance became dean of the School of Dentistry at Meharry Medical College in Nashville, Tenn. From there, Chance went to the University of Kentucky, where he won awards for teaching and also advised the school’s chapter of the Student National Dental Association. He has been active in faculty development and interprofessional education initiatives at Kentucky after earlier leading extensive efforts at UMDNJ to engage minority students in the pursuit of dentistry.

“Professor Chance’s breadth of experience and dedication to dental education and research deeply impressed the search committee,” President Snyder said. “He cares deeply for individual patients and students, and at the same time understands the vital importance of systemic approaches to improvement within dental schools and across health care itself.”

The search committee, led jointly by Case School of Engineering Dean Jeff Duerk and Chair of Orthodontics Mark Hans, evaluated nearly three dozen candidates during the course of the process.

During Goldberg’s 17 years as dean, the school had expanded its research portfolio dramatically and established itself as a leader in educational innovation and community engagement. In more recent years, dental students have worked closely with peers in nursing, medicine and social work to prepare for an evolving health-care environment emphasizing team-based approaches.

“Ken brings a unique perspective regarding Case Western Reserve and changing perspectives regarding the critical role dentists can play within health care,” Provost W.A. “Bud” Baeslack III said. “In addition, his range of leadership positions gives him unique insight regarding ways to engage communities in self-reflection, collaboration, and ambitious improvement.”

He has received more than 60 awards, citations and special recognitions including: Distinguished Practitioner in the National Academy of Practice in Dentistry, fellowships in the American and International College of Dentists, Pierre Fauchard Academy, and Omicron Kappa Upsilon Honor Society.

Chance has received multiple honors from Case Western Reserve’s dental school, including the Paul P. Sherwood Award for Excellence in Endodontics in 1979, Distinguished Alumnus of the Year in 2004, Appreciation and Recognition of Commitment in 2011, and Discovering the Future of Dental Medicine Award in 2012. He also gave the school’s 2005 commencement address.

Chance will become the first African-American dean of the dental school.