University Circle to come alive with music this summer for ”Play Me, I’m Yours” 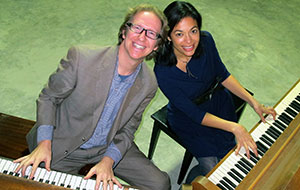 Here’s your chance to live out your dream of performing in public.

The Cleveland International Piano Competition and Case Western Reserve University will make your dream possible by bringing to Cleveland “Play Me, I’m Yours,” a public art installation of 21 working pianos to be placed—ready for spontaneous playing—throughout University Circle this summer. “Play Me, I’m Yours” is part of an internationally touring public art display devised by British artist Luke Jerram.

The event is co-presented by the Cleveland International Piano Competition (CIPC) and Case Western Reserve, with support from the George Gund Foundation. It also was made possible by a generous gift of 22 pianos from Steinway Hall – Akron, paint from Sherwin-Williams and transportation by Allied Piano Movers.

Jerram will visit Cleveland to kick off the exhibition on July 18, which will feature pianos creatively designed and decorated by individuals from Case Western Reserve and other community institutions. The pianos are meant to be played in planned or impromptu street performances by people young and old of all skill levels.

“Whether it is jazz, classical or pop, music is the universal language of the world,” said Pierre van der Westhuizen, executive director of CIPC. “When people sit down at a piano and begin to play in public, endless and fascinating things begin happen.”

The public street performances inspired by “Play Me, I’m Yours” will coincide with piano virtuosos taking stage for the Cleveland International Piano Competition, July 30 to Aug. 10, at the Cleveland Museum of Art and Severance Hall.

Case Western Reserve University plans to set up 10 pianos at various campus locations. Several are slated for Toby’s Plaza near the new Museum of Contemporary Art at the Uptown development on Euclid Avenue.

“This partnership with the piano competition provides a unique opportunity to offer an interactive experience in Uptown at Toby’s Plaza at Case Western Reserve University. This is the type of activity we envisioned for this space and one that the university is proud to sponsor,” said Lara Kalafatis, vice president for university relations at Case Western Reserve University.

Campus pianos will remain in place until Sept. 9 to give returning students a chance to participate. The other pianos will be displayed and played through Aug. 12. At the end of the project, each institution gets to keep its piano. Case Western Reserve University’s pianos will continue to make music as the university works to find sustainable and creative uses for their instruments.

“I was intrigued by ‘Play Me, I’m Yours’ when I read about the project in New York City several years ago and have been hoping that someone in Cleveland would see the potential as well,” said Deena Epstein, senior program officer for the arts at the George Gund Foundation. “I think it offers a wonderful opportunity to enliven Cleveland’s public spaces while engaging the community through the universal language of music.”

Epstein also said that the Gund Foundation is interested in exploring ways that the arts can be used to reach out to new communities, build bridges between cultures, foster creativity and make Cleveland a more vibrant urban center. “Play Me, I’m Yours” has the potential to accomplish all these goals, she said.

Jerram’s idea for the artwork came to him by visiting his local launderette. “I saw the same people there each weekend and yet no one talked to one another,” he said. “I suddenly realized that within a city, there must be hundreds of these invisible communities, regularly spending time with one another in silence. Placing a piano into the space was my solution to this problem, acting as a catalyst for conversation and changing the dynamics of a space.”

In an informal web interview, Jerram explained that the installations are about everyone becoming creative.  So expect some surprises when the pianos arrive this summer. And don’t be surprised at what can happen when public music is made. Jerram has reported that friendships, and even marriages, resulted from impromptu musicians meeting over the piano keys.