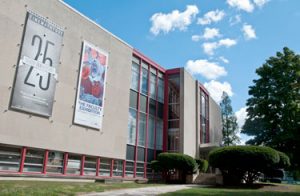 Three University Circle institutions have come together in a transaction that enables one to advance its existing aspirations and the others to preserve future opportunities.

In a joint announcement, the leaders of the Cleveland Institute of Art (CIA), Case Western Reserve University and the Cleveland Museum of Art announced the sale of the college’s property on East Boulevard to the university and museum. The sale will allow the college to fulfill its goal of unifying its campus on Euclid Avenue through construction of a new building adjoining the Joseph McCullough Center for the Arts.

“This transaction is a marvelous manifestation of the increasing collaboration we are experiencing with our University Circle partners and represents an important milestone in unifying our campus,” said Grafton J. Nunes, CIA’s president and CEO.

The 4.13-acre parcel sits at the corner of East Boulevard and Bellflower Road and faces the museum immediately to the west and the university to the south. CIA plans to vacate the structure on the site, the George Gund building, once it completes a new structure adjoined to the McCullough space. Construction is expected to begin by the middle of this year, and Nunes expects that process to take about 18 months. The leaders of the museum and university have not yet developed specific plans for the acquisition.

“When the Cleveland Institute of Art made us aware of this opportunity, we were very excited about the possibilities that this prime location offered us,” said David Franklin, the Sarah S. and Alexander M. Cutler Director of the Cleveland Museum of Art. “It is real estate that both the museum and university can benefit from, and we’re looking forward to working together to use this land to further our missions.”

Added Barbara R. Snyder, president of Case Western Reserve: “We already have powerful partnerships with the Cleveland Museum of Art, and this property provides a new opportunity to explore potential synergies. We also are pleased that our ability to work cooperatively provided a result that benefits all three organizations.”

The purchase agreement among the three organizations calls for closing on the parcel to take place in 2015. The purchase price is $9.2 million.

Meanwhile CIA’s Nunes looks forward to the college’s first single campus in more than three decades. In 2009, CIA initiated a two-phase campus modernization and unification project, with Phase I the McCullough renovation and Phase II the new building.

Like the East Boulevard building, the new CIA building also will be named for George Gund II, the former chairman of the Cleveland Trust Co., who served as CIA board president from 1942-1966. The naming is in recognition of $5 million in grants from the George Gund Foundation, and a combined $5 million in gifts from Gund family members. In recognition of a $5 million commitment to the campus project, the auditorium in the new Gund building will be named for philanthropist and insurance executive Peter B. Lewis. The Peter B. Lewis Theater will be the new home of the acclaimed CIA Cinematheque.

In addition, CIA will open a new Euclid Avenue student residence hall in August 2014, as part of Phase II of the Uptown Project.

“At a time when our enrollment continues to increase,” Nunes said, “we look forward to completing a campus redesign that will serve us well for decades to come and add a vibrant student component to the Uptown District.”

Case Western Reserve and the Cleveland Museum of Art are partners on several endeavors. One of the most successful of the shared initiatives is a joint doctoral program in art history. Dating back to 1967, the joint effort recently received a significant new endorsement: the Andrew W. Mellon Foundation awarded two grants totaling $500,000 to support a re-imagining of the academic offerings to convey the knowledge and skills required for 21st-century curators. Many classes are held at the museum, where students have access to the comprehensive permanent collection, and students enjoy access to the museum’s Ingalls Library and Archives, the third-largest art research library in the United States, as well as to the resources of Case Western Reserve’s Kelvin Smith Library.

Today Case Western Reserve is completing its $50 million Tinkham Veale University Center, located across Bellflower Road from the newly acquired site. In addition, the university is amid fundraising for two additional major capital projects, the Milton and Tamar Maltz Performing Arts Center at The Temple – Tifereth Israel, and a new medical education and research building for the 24th-ranked School of Medicine.

At the same time, the Cleveland Museum of Art is on pace to complete its renovation and expansion project at the end of 2013. It recently celebrated the opening of the stunning Ames Family Atrium, new dining facilities, museum store and galleries featuring work from the Late Medieval, Renaissance and Islamic collections.