Understanding the neurological code behind how flies fly

A common flesh fly takes off and maneuvers effortlessly, her head and body steadied by a hidden, minuscule gyroscope-like structure that gives these flies unparalleled balance.

That same fly—with those specialized structures, known as “halteres,” now surgically removed—takes off again, but immediately begins to tumble wildly about, unable to right herself or tell up from down, side from side.

So what’s happening? Why does it matter? And what might it mean for us?

Case Western Reserve University’s Alexandra Yarger, a PhD candidate in biology and first author on a new paper published in September in the journal Proceedings of the Royal Society B, has some of the answers to those questions.

Yarger studies the electrical activity of neurons in the haltere structure, which was once a second set of wings, but transformed by millions of years of evolution into what serves as the unseen balancing system.

Her discoveries might someday help us build more responsive drones or better-balanced robots, said Jessica Fox, assistant professor of biology at Case Western Reserve and Yarger’s mentor on the project. Her lab has been studying the behavior of flies and how sensory systems process information since 2013.

“We had already demonstrated in a 2015 paper what flies actually do with their halteres when moving around and in this paper, we’ve asked what their nervous systems do with that information,” she said. 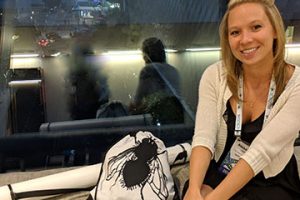 Yarger gained much of her insight by essentially taking over the operation of the haltere. She glued a bit of metal to the tip of each fly’s haltere and then manipulated it with a small magnet to simulate a change in orientation during flight and then recorded the electrical signals it generated—essentially a code sent “downstream” to the muscles make the fly a better flier than other insects.

“We know that the halteres activate the neurons, which in turn, tell their wings and neck what to do—but no one really knew exactly how that happened until now,” said Yarger, who worked on the project over a period of about two years, beginning in 2016.

Scientists had first shown the effect of haltere removal as far back as 1714, Fox said.

And the idea that when the fly was rotating, neurons might respond differently than when the fly was not rotating had been postulated 70 years ago by a scientist named J.W. Pringle, but he was never able to test his hypotheses directly for lack of technology to do the job.

“Alex found that both of these ideas were correct and now we have a clear idea of what the code is because she found it,” Fox said. “We found that this single spike moving around in time is what forms the code of ‘I’m rotating’ vs. ‘I’m not rotating.’

“Next, we want to know how the downstream neurons integrate inputs from these 300 cells to produce an appropriate behavioral output.”