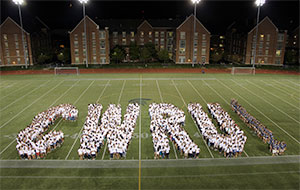 More than 18,000 students have applied for admission to Case Western Reserve’s Class of 2017—a figure that represents growth of 25 percent over 2012, and 150 percent over those who applied five years ago.

“This remarkable result represents years of strategic effort on behalf of our enrollment management team,” President Barbara R. Snyder said. “Even more, it highlights how dedicated our current undergraduates and faculty are to telling prospective students about the extraordinary opportunities on our campus.”

Admissions applications began climbing in 2008, and surged more than 40 percent in 2011 alone. That leap drew national attention, including The Huffington Post calling Case Western Reserve a place that “flies under the academic radar… but shouldn’t.”  The description came as the popular online news site cited the campus as one of nine “trendiest colleges,” a list that also included Columbia and Yale.

“As I meet with students and counselors around the country, it has become increasingly clear that they are recognizing our many great strengths,” said Vice President for Enrollment Management Rick Bischoff. “We have a wonderful story to tell—and people are listening.”

Among the aspects of the undergraduate experience that appear to resonate most with prospective students and their families are:

In 2012 the university admitted just more than half of its applicants, a decrease of more than a third over five years earlier. Bischoff expects competition for acceptance to be even more intense this year. Three quarters of those who entered this fall stood in the top 10 percent of their high school class. Their median SAT scores ranged from 1280 to 1450. And they included young people who had performed at Carnegie Hall, authored books and even launched successful technology start-ups.

“Our admissions team found reading last year’s applications both humbling and inspiring,” Bischoff said. “They cannot wait to get to know the Class of 2017.”

Additional applications will arrive after the deadline—for example, by U.S. Mail—so final tallies will not be available until later this month.