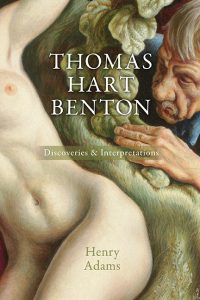 Thomas Hart Benton captured early- to mid-20th century America with a style and swagger uniquely his own. Capturing what made the painter tick—and tick-off so many people—has been a career-long pursuit of art historian Henry Adams.

In fact, Adams was one of the first scholars to take Benton seriously, paving the way for the artist’s posthumous rise in esteem (and the prices paid for his works).

For an artist considered simple and reactionary during his lifetime, the turnaround in Benton’s reputation has been dramatic—and due in no small part to the insight and scholarship of Adams, the Ruth Coulter Heede Professor of Art History at Case Western Reserve University.

“Almost without realizing it, I had written a book,” said Adams, author of the new Thomas Hart Benton: Discoveries and Interpretations (University of Missouri Press), a collection of writings from his nearly 30 years examining Benton’s life and career. The book comes out today (Dec. 1).

“When I started, there was immense hostility to Benton’s work,” said Adams “Now, he’s come back into favor.”

Nowhere is this appreciation more evident than in the sizable sums paid—and rampant fakery—of Benton artworks. 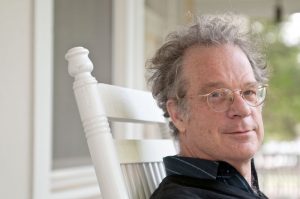 In the book’s last chapter, Adams writes of assessing the legitimacy of Benton pieces for the likes of Christie’s and others—and concluding at least half were forgeries. (When Benton died in 1975, there were no experts or catalogues of his art, providing a window for forgeries to flood the market.)

Telltale signs of fakery come in clumsy brushstrokes, or pastiches that borrow and remix elements of famous Benton paintings; Adams has even used infrared technology to peer under paint for sketch marks in fitting with Benton’s habits.

At one point, Adams’s identity was stolen; an unknown person, posing as Adams, vouched for the authenticity of a Benton fake in a letter to Sotheby’s.

“The brazenness of some attempts have kept me on my toes,” he said.

An artist still in review 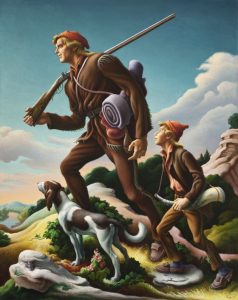 Before Benton’s artwork found fame in the early 1930’s, he dabbled in trendy genres of the early 20th century, traveling, moving, and living in squalor until his sweeping mural America Today launched his career and solidified his artistic signature—colorful and crowded renditions of American life and history, as viewed through his own lens.

Benton had a knack for touching a nerve, Adams writes, an extension of the artist’s rabble-rousing personality. In a mural commemorating Indiana history for the World’s Fair, he juxtaposed Abraham Lincoln’s boyhood with a burning cross, illuminating members of the Ku Klux Klan, a still-controversial (yet accurate) nod to the state’s past as a hotbed for the hate group.

Along the way, Benton was branded a racist, anti-Semitic and a reactionary for his artwork—accusations “most of which are untrue,” according to Adams.

“Benton wanted us to see what happened, and what is happening,” said Adams. He lauds the artist’s willingness to depict prickly issues, such as income inequality, hypocrisy in religion and the media’s role in shaping prevailing views.

Essentially, Benton was ahead of his time—a common refrain in the essays, articles and speeches that are the source material for Adams’s book. 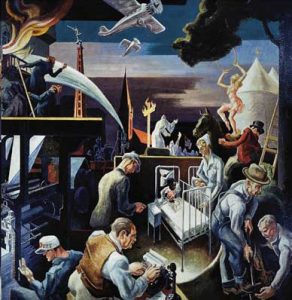 Chapters create a non-linear portrait of the artist’s life, from Benton’s use (and appreciation) of African-American subjects, his relationship with onetime student Jackson Pollack, and his unsung contributions to American music and letters.

For daring to embrace Benton’s work, Adams endured his own share of slights and dismissals. But then again, “perhaps I should not complain,” Adams writes in the book, “researching an artist who is out of favor provides a good opportunity… to make new discoveries.”

What began as an assignment for Adams in the late 1980’s—then a young curator in Kansas City tasked with creating an exhibit for Benton’s centennial—morphed into an ongoing fascination that helped re-define Benton’s legacy as an indispensable American artist.

“Benton is a much richer person and artist than I understood at first,” said Adams. “And, still, there is more to be said—still more to discover.”

This fall, Adams’s contributions to the Northeast Ohio arts community were honored with a show created by ARTneo: the Museum of Northeast Ohio Art. Henry Adams: A Curatorial Review displayed works by regional artists who have been exhibited in shows Adams has curated or subjects of his scholarship.