U.S. Supreme Court to review challenge to Obamacare based on research by Law Professor Jonathan Adler 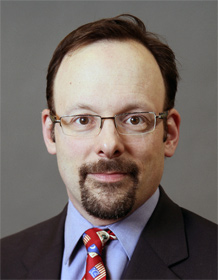 What began as legal analysis of the Affordable Care Act after it became law in 2010 now has Case Western Reserve University School of Law Professor Jonathan Adler close to a case that the U.S. Supreme Court agreed Friday to review.

At stake is the future of the law known as Obamacare, which authorizes subsidies to make health insurance more affordable, especially for the uninsured. Adler, in a paper he presented at a law conference in 2011, identified what seemed to be a glitch in the law’s wording.

That concern has become crucial to the case King v. Burwell. At issue is the part of the law limiting health insurance subsidies to “an exchange established by the state.”

But if a state does not establish an exchange—and 36 states have not—does that mean the federal government fills the gap? High-level courts have been trying to interpret the intent of Congress.

“I did not begin work on this issue in anticipation that it would ever be litigated, let alone that it would end up before the Supreme Court,” said Adler, the Johan Verheij Memorial Professor of Law and director of the Center for Business Law and Regulation at the Case Western Reserve School of Law.

“I got involved in this because I was asked to apply some of my insights on federal-state relations in environmental policy to the health care law for an academic conference,” he said. “In doing that work, I made some observations that ended up being significant, given the growth in state resistance to implementing the law and the choices the administration made implementing it.“

Early on, Adler collaborated with Michael Cannon, a health care policy expert at the libertarian Cato Institute, on whether the law limits subsidies to the state exchanges. The IRS has ruled that Affordable Care Act subsidies through federal exchanges are acceptable under the law, and the Obama administration contends the law is meant for all Americans.

“While these issues related directly to some of my core research interests in federalism and administrative law, I did not expect that this would become a big issue. I did not expect the Supreme Court to take the case. It is always safe to bet against a cert grant,” Adler said.

The term “cert grant” refers to a writ for judicial review. The U.S. Supreme Court issues a cert grant to only a small percentage of cases. There was wide belief the court might not be ready to again take on Obamacare. A 5-4 decision at the Supreme Court in 2012 validated the constitutionality of the Affordable Care Act.

“However, I think the grant is readily understandable,” Adler said. He went into some detail about the urgency in an online post Friday:

“This litigation creates substantial uncertainty about the operation of the law and, should the plaintiffs’ claims be upheld, policymakers, insurance companies, and those who would otherwise be eligible for subsidies will need time to figure out how to respond. This is one of the reasons all of the lower appellate courts to consider these claims have expedited their proceedings. They recognized that there are good reasons to treat these cases as more urgent and time-sensitive than the typical case.”

Adler knows for sure he will not be making an oral argument in the case before the Supreme Court.

“I will not be arguing the case. I do not represent any of the parties in the case,” he said. “I will, however, almost certainly submit an amicus (friend of the court) brief with my co-author (Cannon) presenting some of our research and findings to the court.”

Oral arguments will be held in March, and a decision is expected by late June, Adler said.