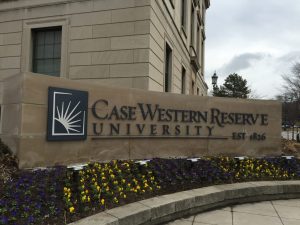 The Frances Payne Bolton School of Nursing master’s degree program leapt nine notches to eighth this year, while its Doctor of Nursing Practice (DNP) debuted at fifth in the country in the magazine’s first-ever rating of DNP programs. In addition, the Jack, Joseph and Morton Mandel School of Applied Social Sciences maintained its No. 9 spot in U.S. News‘ ranking of social work master’s degree programs.

“We are extremely pleased to have three of our graduate degree programs ranked in the top 10 in the nation this year,” President Barbara R. Snyder said, “Nevertheless, we recognize the imperative of continuing to evaluate our performance across all programs and criteria, and identify steps toward improvement.”

The nursing school also ranked ninth in the country for nurse practitioner education in gerontological acute care, and climbed two spots, to 15th, in nursing midwifery.

In addition to maintaining its position as ninth in health law, the School of Law also stayed at 11th place in international law. The law school improved its overall standing in the publication’s listing by climbing two notches to 57—after climbing five slots the previous year.

The Case School of Engineering also improved, moving up one slot to 46th. The engineering school improved its standing in several categories, including recruiter ratings, graduate admissions test scores, and the percentage of members of the National Academy of Engineering on its faculty.

Meanwhile, the School of Medicine dipped one position, to 25th in the country for research-oriented medical schools, but improved its performance by more than $10 million in annual funding from the National Institutes of Health. U.S. News calculates this figure by securing averaging NIH funding from the 2014 and 2015 fiscal years; in this year’s rankings, the figure is $296.5 million, higher than seven of the schools ranked above it, including the University of Chicago (ranked 11th overall) and Northwestern (ranked 17th).

U.S. News does not rank dental schools, but this year’s report places its other health-related programs either the top 10 or top 25 in the country. This showing is particularly promising given the university’s increasing emphasis on interprofessional education—an approach that brings together students from multiple disciplines for courses and other learning opportunities. The Mandel School, dental medicine, medicine and nursing schools all collaborate in this area.

The university—including the Cleveland Clinic Lerner College of Medicine, a program within the medical school—has secured significant grant funding to advance these efforts. More recently, Case Western Reserve and Cleveland Clinic broke ground on a 485,000-square-foot Health Education Campus, which will be home to students in dental medicine, medicine and nursing. (Construction began last year on the Mandel School’s $9.2 million renovation of its own building, but its students will continue collaborative learning with their peers after the Health Education Campus opens in 2019.)

Research shows that team-based health care improves patient outcomes and satisfaction, and also increases caregivers’ sense of professional satisfaction. The campus is designed to encourage interaction among all students, in classrooms, study spaces, and dining areas.