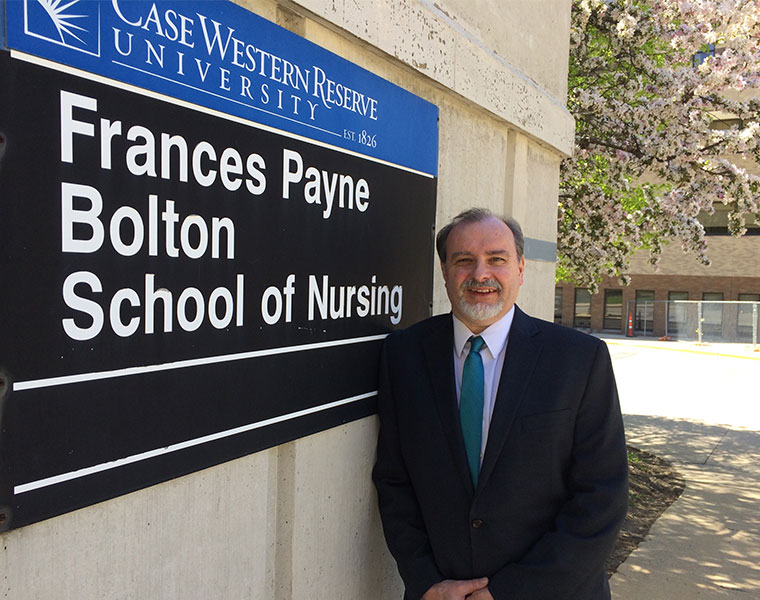 Associate Professor Christopher Burant said he is “standing on the shoulders of giants” who inspire him to become a better educator and person.

Leading that roster of giants: lifelong teachers like his grandmother Lillian; his instructors in the 1980s at Bedford, Ohio’s St. Peter Chanel Catholic High School; his wife, Barb; his sister, Patty and a trio of in-laws who are music teachers.

“I see teachers everywhere, every day,” said Burant, whose primary appointment is at Frances Payne Bolton School of Nursing, where he began teaching in 2007. “Take my friend Bob. He can fix anything and he patiently showed me how to do a home project that I had no idea how to do. Bob’s a giant to me.”

It is Burant who is standing particularly tall today.  He’s the first two-time winner of one of Case Western Reserve University’s highest honors, the John S. Diekhoff Award for Distinguished Graduate Student Teaching. He also won in 2015.

Created in 1978, the award is presented annually to two faculty members who have made exemplary contributions to graduate students in the classroom. The winners will be recognized at commencement May 20.

Burant is dedicating this year’s award to the memory of another teaching giant, his late friend and fellow nursing professor Greg Graham, who died in 2016.

Almost all of his classes consist of graduate students at the master’s or doctoral degree levels. Although he is not a nurse, more than half of his students are in the nursing PhD program.

“When I first started teaching statistics in nursing, some people wanted the courses to be changed and simplified for nursing students,” he said. “I said ‘Just give me a few semesters and let’s see.’”

More than a decade later, in addition to nursing, Burant has taught graduate students from 15 other departments. He also has secondary appointments in Organizational Behavior at Weatherhead School of Management and at the University Center on Aging and Health.

Some of those students poured out their admiration and respect for Burant in nominating letters, describing him repeatedly as: “genuine,” “approachable,” “patient,” “caring,” “flexible” and “kind.”

“And, yes, he actually gives out stickers (gold stars) when we do well,” wrote one student in a nominating letter.

“Graduate programs are fraught with uncertainty and fear of failure,” wrote another student nominator, “and I think having a professor that you feel safe with is the best way for graduate students to improve and succeed.”

The bottom line for Burant is to make statistics—and education itself—a life-changing, exciting and enjoyable experience.

“I never want a student to feel lost; if they’re lost, they’re not learning,” he said. “But if you take the time, you see their eyes light up—even at this level.”

Burant also does statistical research about stress models in caregiving situations. He’s also an expert on aging issues and a member of the Gerontological Society of America, which honored him as a fellow in 2014 for his outstanding work.

These awards are presented during the Graduate Studies diploma ceremony.