The Fulbright Program is the flagship international educational exchange program sponsored by the U.S. government and supported by cooperating foreign governments around the world. 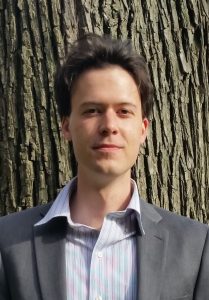 Starting in September, Michael Bane, a fifth-year PhD candidate in music at Case Western Reserve University, will call Paris his home for a year.

Bane won a Fulbright Scholarship, giving him the opportunity to learn from many of the French music scholars at the Centre de musique baroque de Versailles and Centre d’études supérieures de la Renaissance in Tours who inspired his own work.

Bane’s scholarship represents the third Fulbright in three years for the music department, following last year’s winner, John Romey, who is still in Paris, and Alanna Ropchock, who did research on early music in Germany in 2013-14.

“This impressive streak—along with the many other awards and honors our students have received recently—reflects both the very high quality of the students we draw and the outstanding instruction and mentoring those students receive from their Department of Music faculty members. It’s a remarkable crew,” said Department Chair David Ake.

Bane and Romey credit the guidance and direction from their adviser Georgia Cowart, professor of musicology, who, in researching the Parisian archives and libraries, made her own discoveries that linked politically driven art and music during the Baroque era.

Following the Fulbright Scholarship, Bane’s research received the Alm Award for Outstanding Student Paper a the Society for 17th-Century Music at the organization’s recent national meeting in Iowa City.

Bane, of Appleton, Wis., has playing guitar since age 11 and earned a Master of Music degree in classical guitar performance from Northwestern University in 2010. These days, the musician said he plays as much Chet Atkins as Bach.

The scholar plans to use his Fulbright to fill in missing pieces of French musical history: the contributions of its amateur performers.

“Then, as today, most musical performances were by amateur performers,” Bane said. He explained that amateur artists tend to be written out of musical history in favor of professional performers and composers.

He plans to account for that gap in French cultural history with research for his dissertation, “Honnêtes Gens as Musicians: The Amateur Experience in Seventeenth-Century Paris.”

Honnetês gens, he said, means “honest people” in French. The words describe a group of influential urban nobles and bourgeois that had the time and money to spend on self-refinement and musical performance, he said.

“They adhered to sophisticated rules of behavior and elevated etiquette to an art form,” he said. “My dissertation is going to be a far richer project now that I have the opportunity to examine so many rare and relevant sources in Paris.”

Aside from his research, Bane takes his pending role as a cultural ambassador seriously. He said he’s looking forward to working with French colleagues, speaking their language, experiencing a new way of life and contributing his perspective as an American.

Bane also expects the experience to be transformative for his work and provide valuable research opportunities through access to the city’s archives and libraries.

“A lot of my research deals with the music of 17th-century Paris,” he said. “So the chance to walk the same streets and speak the same language as the musicians I study is very exciting.” 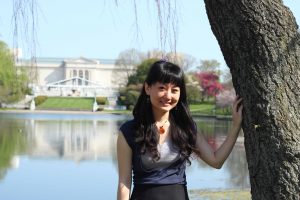 Yilu Qin envisions her upcoming 2015 Fulbright-Fogarty experience in Guangzhou, China, as one that will set the stage for her future career as a primary care physician and global health researcher.

“I am interested in understanding better why people are lost to follow-up after HIV diagnosis,” said Qin, a Solon, Ohio, native, and medical student at Cleveland Clinic Lerner College of Medicine of Case Western Reserve University. “Anti-retroviral therapies can now achieve disease suppression successfully, but that requires consistent treatment. By the time people are hospitalized with AIDS, many have discontinued their meds for too long, and those will no longer be effective.”

The Fulbright experience, which begins in August and continues for about a year, will build on her observations during medical school clinical rotations that many patients face barriers managing their health. She is particularly interested in what motivates people to comply with medical treatment, or not.

Qin will conduct her Fulbright-Fogarty project in the Guangdong Province, an area of South China with a high HIV prevalence. She will work closely with local Chinese Center for Disease Control and Prevention facilities, as well as service-based, non-governmental organizations (NGOs), such as AIDS Care China.

Her investigation will focus on HIV self-testing to determine its impact on linkage to care for HIV patients. She hopes to discover novel public health interventions for HIV and uncover weaknesses in health care links that prevent HIV-positive patients from seeking follow-up care.

Today, HIV testing in China occurs mostly in government centers that have little experience with high-risk HIV populations (such as IV drug users and prostitutes/sex workers). These patients avoid testing and follow-up care in government centers because of the stigma of HIV. NGOs, such as AIDS Care China, are filling in the gap with testing and HIV prevention education, but NGOs have the potential to encourage ongoing treatment for HIV in affected patients to prevent progression to full-blown AIDS.

“My research will look at ways that community organizations could take a more visible role in HIV care in the future,” Qin said. “The purpose is to expand HIV care and reach more people.”

Through the Fulbright application process, she worked with mentor Joseph Tucker, MD, PhD, an infectious disease specialist based in Guangzhou, China, and director of the University of North Carolina Project-China.

Heritage also played a role. Her parents, Jun Qin and Xinyun Jiang, emigrated from Changzhou (a city near Shanghai) to the United States a year after she was born. Still, they encouraged her to learn and maintain her Chinese language skills.

“The Fulbright-Fogarty Fellowship in Public Health seemed like a good fit for me,” Qin said. “I am excited to embark on a life-changing journey and meet interesting people. I know there will be challenges, but stepping outside my comfort zone will impact my future in the best possible way.”