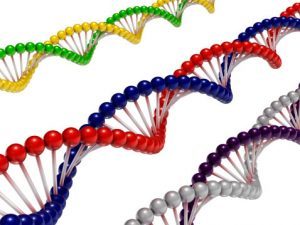 Molecules that are twisted are ubiquitous in nature and have important consequences in biology, chemistry, physics and medicine. Some molecules have unique and technologically useful optical properties, the medicinal properties of drugs depend on the direction of the twist, and, within us—think of the double helix—twisted DNA can interact with different proteins.

This twisting is called chirality, and researchers at Case Western Reserve University have found they can use a macroscopic blunt force to impose and induce a twist in an otherwise non-chiral molecule.

Their new “top-down” approach is described in a recent issue of Physical Review Letters.

“The key is that we used a macroscopic force to create chirality down to the molecular level,” said Charles Rosenblatt, professor of physics at Case Western Reserve and the senior author on the paper. Rosenblatt started the research with no application in mind. He simply wanted to see if it could be done—essentially scientific acrobatics.

But, he pointed out, since antiquity, chirality has played a role in health, energy, technology and more—but until now, chirality always has been a bottom-up phenomenon. This new top-down approach, if it can be scaled up, could lead to custom-designed chirality—and therefore desired properties—in all kinds of things.

Chirality isn’t as simple as a twist in a material. More precisely, a chiral object can’t be superimposed on its mirror image. In a “thought experiment,” if one’s hand can pass through a mirror (like Alice Through the Looking Glass), the hand cannot be rotated so that it matches its mirror image. Therefore one’s hand is chiral.

Depending on the twist, scientists define chiral objects as left-handed and right-handed. Objects that can superimpose themselves on their mirror image, such as a wine goblet, are not chiral.

In optics, chiral molecules rotate the polarization of light—the direction depends on whether the molecules are left-handed or right-handed. Liquid crystal computer and television screen manufacturers take advantage of this property to enable you to clearly see images from an angle.

In the drug industry, chirality is crucial.

The reason for the different effects? The drugs interact differently with biomolecules inside us, depending on the biomolecules’ chirality.

After meeting with Lemieux at a conference, the researchers invented a method to create chirality in a liquid crystal at the molecular level.

They treated two glass slides so that cigar-shaped liquid crystal molecules would align along a particular direction. They then created a thin cell with the slides, but rotated the two alignment directions by approximately a 20-degree angle.

The 20-degree difference caused the molecules’ orientation to undergo a right-handed helical rotation, like a standard screw, from one side to the other. This is the imposed chiral twist.

They observed a modest rotation, which became larger when they increased the twist.

“The effect was occurring everywhere in the cell but was strongest at the surface,” Rosenblatt said.

Scientists have built chirality into optical materials, electrooptic devices and more by starting at the molecular level. But the researchers are not aware of other techniques that use a macroscopic force to bring chirality down to molecules.

The researchers are continuing to investigate ways this can be done.