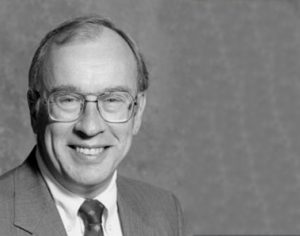 From the Agnar Pytte Science Center to the iconic Peter B. Lewis Building and dozens of projects in between, the longtime planning leader played a pivotal role in shaping the physical face of the university—even if he regularly eschewed credit for his efforts.

Kutina, of Chagrin Falls, is survived by his wife, Judy, and their adult children, David and Krista. Case Western Reserve will have a memorial service for Kutina at 4 p.m. Monday, Aug. 15 in Amasa Stone Chapel, with a reception immediate following in the lower level of Crawford Hall.

“Ken Kutina’s influence on Case Western Reserve can be seen in countless ways, large and small,” President Barbara R. Snyder said. “Beyond the building projects and his beloved farm, however, Ken’s most lasting impact is in the example he set and people he inspired during his decades helping to shape this campus.”

Kutina first came to the university as an undergraduate in the mid-1950s, then returned as a teacher of statistics and mechanical engineering after earning a master’s degree at Cornell University.

He left again for work in private industry, but then came back to campus for graduate study, earning a master of business administration degree in 1967 and a doctor of philosophy degree in 1974.

This time Kutina stayed, serving as an administrator whose responsibilities included overseeing campus planning of major capital improvements. As the years progressed he earned increasingly senior positions at the School of Medicine and the university.

Ultimately, Kutina managed nearly $300 million in campus construction projects, helped secure more than $57 million in institutional support for research and physical improvements and, as an educator and researcher, published 26 papers on simulation modeling and analytical tools for higher education. 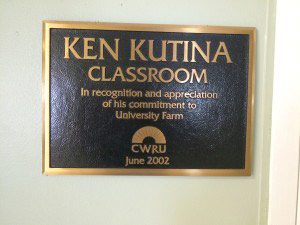 He also forged a lasting bond with the university’s 400-acre Hunting Valley farm. In the late 1970s, Kutina helped launch and became a charter member of the farm’s management committee. After making several personal donations to the farm along with colleagues, he collaborated with them to establish a formal endowment fund to ensure the farm continued to provide robust research, education and recreation opportunities for generations to come.

“Having Ken at the farm as emeritus professor was a gift and a privilege for all us,” said University Farm Director Ana Locci. “He helped us secure numerous grants for renewable energy projects, was directly involved in obtaining several endowment gifts and guided us during projects to update and remodel historical buildings. He was a quiet and gentle leader, and the most honest and humble person I know.”

Even in retirement, Kutina maintained his involvement with the university, working part-time for the School of Medicine as a senior consultant for three years.

Eventually the university’s board of trustees named Kutina Vice President Emeritus of Institutional Planning. Not surprisingly Kutina chose the farm for his emeritus office, which also is where the Kutina Classroom in the main barn is reserved for university departments and educational groups.

Another spot that bears his name can be found in Adelbert Gym, where a second-floor balcony, dubbed “Kutina’s Landing,” stands as a nondescript tribute to his passion for the university and willingness to step up when needed.

In 2006, the Case Western Reserve men’s and women’s basketball teams wanted to celebrate their programs’ histories by playing games there as part of the first “Throwback Weekend.” But the building code wouldn’t allow it—because the second-floor railing was dangerously low. With Kutina’s contribution, a new railing was installed and the historic weekend was an overwhelming success.

As an offshoot to his commitment to higher education, Kutina also served on the Ohio Higher Educational Facility Commission since 1997, most recently reappointed by Ohio Gov. John Kasich in 2012 to serve a new eight-year term. He served as as a member and secretary of the commission, which issues tax-exempt bonds for private, non-profit colleges, universities and hospitals in Ohio.

Those who would like to make contributions in Kutina’s memory can do so online and indicate that their gift is for the Case Western Reserve University Farm: Squire Valleevue and Valley Ridge Farms Annual Fund. Individuals also can mail checks to the university at: Office of Advancement Services, Case Western Reserve University, 10900 Euclid Avenue, Cleveland, Ohio 44106-7035 and noting that the gift is for the farm and is in memory of Kenneth L. Kutina.