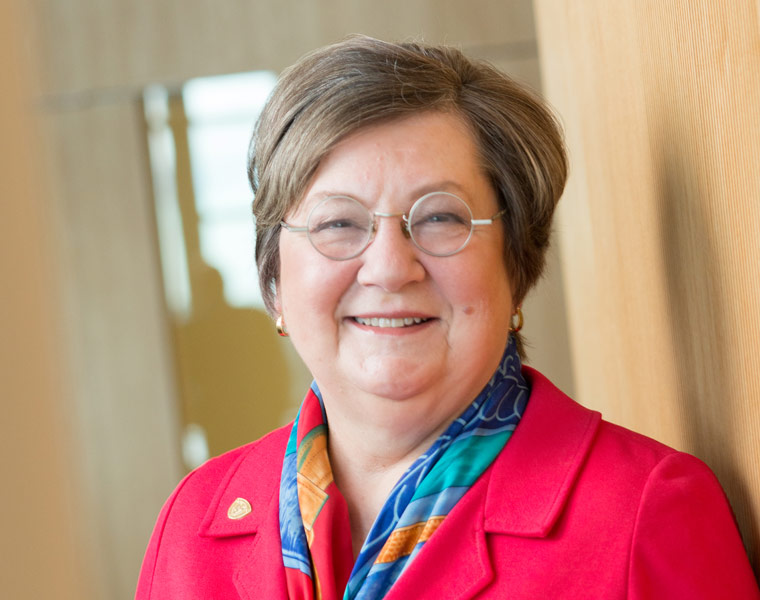 Transformative—that describes Pamela Davis’ impact as a leader, educator, researcher and mentor, not only at Case Western Reserve University School of Medicine but across the university and Northeast Ohio.

Davis, the Arline H. and Curtis F. Garvin Research Professor and former dean of the School of Medicine (2007-20), will be named one of three Distinguished University Professors at convocation today (Aug. 31).

During her tenure as the dean of the School of Medicine, the school ranked 11th nationally for producing successful academic researchers, 20th in National Institutes of Health (NIH) funding, and was a consistent top-25 national research institution according to U.S. News & World Report.

Not only is Davis an accomplished researcher and clinician, but her contributions to advancing innovations in medical education have created a lasting legacy. She championed the innovative WesternReserve2 curriculum in medical education, which emphasizes scholarship, civic professionalism and tools for lifelong learning. While dean, enrollment in the school’s master’s degree programs more than doubled, and programs were expanded and added, including the Physician Assistant Program and pathways programs focusing on new areas of study.

Davis played a leading role in the school’s most prominent collaborative achievement in education—the Health Education Campus. The Samson Pavilion opened in 2019, launching a new era in interprofessional health education.

“Dr. Davis’s distinguished career in academic medicine is one to aspire to as she combines excellence in medicine, research, innovation, entrepreneurship, education, mentoring, collaboration and leadership,” said School of Medicine Dean Stan Gerson. “Her promotion of training and support for women in medicine leadership continues to have a profound effect on careers and our school.”

In addition to being recognized as an extraordinary leader, she has passionately worked to advance cystic fibrosis (CF) research and has successfully developed novel therapies bringing them to clinical trials.

“The dramatic breakthroughs in cystic fibrosis would never have occurred without Pam Davis,” said a nominator. “She was a critical partner with scientists across the world, a selfless leader who brought teams together, and a driving force that kept the field moving forward. Few individuals change the world by dramatically impacting a disease—Pam did.”

Less than two years after stepping down as dean, Davis pivoted from leading the school to an active funded research program aimed at solving many of today’s healthcare issues and advancing equity in healthcare and among caregivers.

“I am honored and grateful to be named a Distinguished University Professor by the university I have served for over 40 years,” said Davis. “I have been privileged to lead great organizations here, including the Willard A. Bernbaum Cystic Fibrosis Research Center and our School of Medicine, and, in those positions, to collaborate with incredible faculty, staff, students, and donors to participate in the development of new treatments for cystic fibrosis and to advance the goals of our top-flight School of Medicine. This is truly a career-capping honor.”

She is the founding scientist of Copernicus Therapeutics Inc., a biotechnology company that creates novel pharmaceutical targeting and delivery systems. Davis holds seven U.S. patents, has published more than 160 articles and serves in prominent scientific roles in many professional organizations. Davis has been elected to the National Academy of Medicine, the National Academy of Inventors, and as a fellow of the American Association for the Advancement of Science, and has previously been awarded the Hovorka Prize by the university.