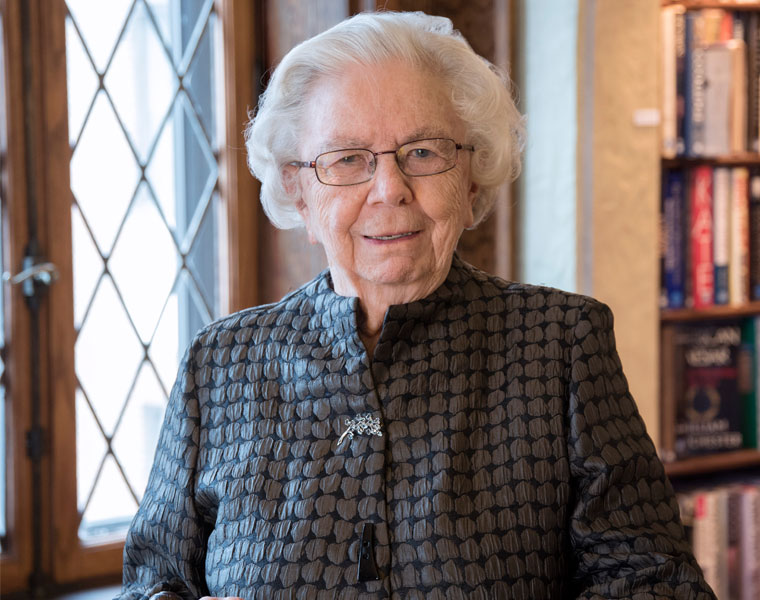 Trailblazer and warrior for people with developmental disabilities

It was the 1940s, a time when women rarely questioned the establishment.

But Jane W. Kessler, whose lifetime of service as a clinician, scholar, teacher and community leader has knitted a rich mosaic, had the guts to challenge the medical community on behalf of parents and their children with developmental disabilities, and then addressed their challenges in a way that preserved their dignity.

For that and more, Kessler, PhD (GRS ’51, psychology), the Lucy Adams Leffingwell Distinguished Professor Emerita in the Department of Psychological Sciences, was awarded the 2018 Frank and Dorothy Humel Hovorka Prize. The award is presented annually to an active or emeritus faculty member whose exceptional achievements in teaching, research and scholarly service have benefited the community, nation and world.

“In many ways, Jane W. Kessler epitomizes the aims and values of the Hovorka Prize,” Elizabeth Short, a professor in Case Western Reserve’s Psychological Sciences Department, wrote in a nominating letter for the award on behalf of faculty members from across campus.

Kessler, 97, a University Circle resident, will accept the award during commencement ceremonies May 20.

After retiring from the U.S. Navy (WAVES) in 1946, where she served as a psychologist conducting assessments on World War II soldiers, Kessler became the first staff psychologist at University Hospitals (UH) in Cleveland. In 1948, she was named chief psychologist in UH’s Child Psychiatric Clinic, while earning a doctorate in psychology at Western Reserve University (WRU).

Kessler was asked to plan, execute and evaluate a neurosurgical procedure designed to increase the blood flow to the brains of children with developmental disabilities. She tested about 500 children, vigilantly collecting evidence to prove the procedure’s ineffectiveness, and then defend what she found to the medical establishment.

“Dr. Kessler,” Short wrote, “championed causes for patients who had no voice.”

“When it started in 1959, there were no programs for the developmentally disabled,” she said. “Nobody paid any attention to them, and they were very much third-class citizens. The schools, if they had any program at all for them, the classes would be in the basements, with very little interest and no resources. And that changed. We were one of the first—if not the first in the nation—to get started.”

Kessler still appreciates how WRU President John Millis and the board of trustees enthusiastically backed the MDC because it served a dual purpose: the center operated a preschool and provided services to the families of the children it served.

“It was wonderful,” she said, “that they were willing to support something experimental and new.”

Kessler was among the first in her field to appreciate that parents with children with developmental disabilities  wanted to keep their children at home and find community services for them.

Her book, Psychopathology of Childhood, published in 1966 and revised in 1988, became a landmark text for generations of graduate students preparing to become clinical child psychologists.

In addition to directing the MDC for 20 years, Kessler chaired the Faculty Senate and the Department of Psychology (twice), and served as the department’s clinical training director.

Beyond the university, she has been a president, board chair and board member for several national, state and local professional organizations and service providers. After retiring in 1993, she spent many years as the proprietor of Appletree Books in Cleveland Heights.

The Frank and Dorothy Humel Hovorka Prize is awarded to an active or emeritus member of the Case Western Reserve University faculty in recognition of exceptional achievements in teaching, research and scholarly service that have benefited the community, nation and world.

Established in 1994 by Mrs. Hovorka, a leader in the arts and community affairs and an honorary member of the University’s Board of Trustees until she passed away in December 2017, the award honors the late Frank Hovorka, who was, for many years, a distinguished member of the faculty in the Department of Chemistry.

The recipient is selected on the recommendation of a committee consisting of previous awardees.