Through artworks hidden in plain sight, a new look at French slavery (and enslavement) 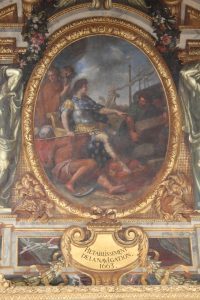 A painted medallion depicting turbaned slaves in chains at the feet of Louis XIV adorns a ceiling at the Palace of Versailles, likely noticed—or its true meaning understood until now—by few of the millions who have visited the site since the late 17th century.

“Louis XIV was projecting grandeur through subjection and triumph over the infidel, in this case Muslim slaves,” said Gillian Weiss, an associate professor and interim chair of the Department of History at Case Western Reserve University.

“But for hundreds of years, people have seen this and similar depictions in an allegorical light—another instance of kings casting themselves as new Roman emperors,” she said. “We’re saying they have a real referent.”

With a grant from the American Council of Learned Societies (ACLS), Weiss will partner with art historian Meredith Martin of New York University for an interdisciplinary study, titled The Sun King at Sea: Maritime Art and Slavery During the Reign of Louis XIV, that could rewrite how early modern Mediterranean history is understood by examining artworks produced at the time.

During this little-studied aspect of history, French and North Africans—then commonly known as “Turks”—enslaved each other.

French depictions of their slave laborers—and the ships and other products they and other prisoners were forced to create—were a key part of Louis XIV’s visual propaganda campaign.

Yet the reality of French slavery (and enslavement) was glossed over because it clashed with the culture’s ideal of free soil: that whoever set foot in the country would no longer be a slave (though there were, in fact, slaves held on France’s coasts).

“France is invested in a mythology of being a land of freedom,” said Weiss, “so this wasn’t talked about for 150 years.

“Art provides context to better understand this history,” she said. “As far as we know, no one’s read these artworks the way we have before.”

Weiss and Martin will also study the era’s galleys, ships propelled by rowers built by the French (and their servile labor), as artistic productions in their own right—a subject relatively unexplored in art history.

During the reign of Louis XIV, these ships (as so-called “maritime art”) were outfitted with sculptures and elaborate prows and sterns with intricate carvings and figureheads. Slaves and convict laborers were trained as carvers and caulkers to create the ships, including the décor. In some instances, the subjects depicted were the slaves themselves, in chains. 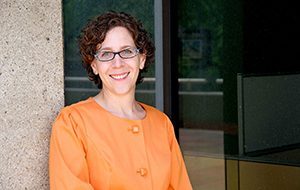 “If you think of a whole ship as a piece of art,” said Weiss, “all the people who put it together are also producers of art. This expands the definition of what we count as art and of who we define as an artist.”

The research project, which will eventually produce a book, will also explore how artwork serves as historical evidence to uncover the views and agency of common people (known as “history from below”), who often leave few archival traces.

“We want to get at this story in a new way,” Weiss said, “using visual material created during the time.”

Weiss and Martin will also highlight how North Africans and others around the Mediterranean contributed to the construction of early modern France, which counters a widely held notion that the country was purely European until its colonial period in the 19th century.

“In more recent times, there’s been a so-called invasion of Muslims, or foreigners, who are said to threaten France’s core values,” said Weiss. “This is a rejoinder to that, to say, ‘No, there’s been a long back and forth among these different populations, which are extremely mixed, and that people from the other side of the Mediterranean have contributed to the construction of this country and society.’”

During France’s 19th-century colonization of Africa, depictions of North Africans as barbaric were used as justification for France’s presence there. Especially then, the notion that the French were ever in a position to be captured and enslaved by their perceived inferiors was embarrassing and complicated the story of French superiority.

“French enslavement was swept under rug,” said Weiss, who explored this history in her 2011 book Captives and Corsairs: France and Slavery in the Early Modern Mediterranean.

In the early 2010s, Martin sent Weiss an image of the Louis XIV ceiling painting at Versailles that kick-started their interdisciplinary collaboration and produced the article “ ’Turks’ on Display during the Reign of Louis XIV.” (PDF)

“We enjoyed working together,” Weiss said, “so we said, ‘Let’s keep doing this.’ ”

During the two-year “Collaborative Research Fellowship” grant, Weiss and Martin will visit each other to research and write a book together on the topic. The award includes a semester of leave from teaching.

“Interdisciplinary collaboration can be very fruitful. We each have expertise the other does not,” said Weiss. “I never would have noticed this picture without [Dr. Martin] or have the opportunity to bring its historical implications to light.”

This year, the ACLS fellowship program, supported by The Andrew W. Mellon Foundation, funded nine collaborative teams with grants, including projects combining “a broad array of fields such as music, anthropology, history, literature, and science studies,” from researchers at Stanford University, the University of Michigan, the London School of Economics, Duke University, Emory University and others.