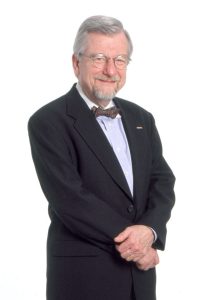 Just a bit after the official festivities have concluded, three-time alumnus William F. Baker will have a homecoming of his own when he returns to Cleveland to give the next Town Hall of Cleveland lecture. Baker (ADL ’66; GRS ’68, ’72, communication sciences) will present “Every Leader is an Artist,” at 6 p.m., Monday, Oct. 7, in Playhouse Square’s Ohio Theatre.

A seven-time Emmy Award winner, Baker will share his experiences launching such household names as Oprah Winfrey, giving Charlie Rose his signature program, and helping create the Discovery and Disney cable television channels. A veteran of three decades in broadcasting, he has authored two books on leadership, Every Leader is an Artist and Leading with Kindness, with Michael O’Malley, a human resources consultant.

“I’ve been in the business for the last 40-plus years, and I think I learned a great deal the hard way: from experience,” he said.

Baker is president emeritus of WNET, the parent company of public media providers Thirteen and WLIW21—two of the most-watched public television stations in the United States and the largest producer of cultural and arts programming in America. Under Baker’s leadership, Thirteen created the Peabody and Emmy Award-winning series City Arts and City Life and the award-winning Religion & Ethics NewsWeekly. In 1991, Baker launched the Charlie Rose show as a local interview program in New York City; it went national the very next year.

Prior to joining WNET, Baker was president of Westinghouse Television Inc. and chairman of Group W Satellite Communications. As leader of Westinghouse, he helped launch five cable networks, including Discovery Channel and Disney Channel, and even introduced Oprah Winfrey to the world as a talk show host.

A prolific fundraiser (he’s raised more than $1 billion in his career and stabilized the finances of Thirteen) and a leader in digital media (he oversaw the transition to digital transmission and the launch of 24-hour channels), Baker has influenced the television industry dramatically. He earned numerous Emmy Awards and induction into several broadcasting associations’ halls of fame.

Baker is a journalist in residence at Fordham University and director of the Bernard L. Schwartz Center for Media, Public Policy and Education. He also teaches at The Juilliard School as well as the IESE Business School at University of Navarra in Barcelona.

In his free time, Baker enjoys amateur radio, astronomy, sailing and polar exploration. In fact, he’s one of only a few people in the world to have visited both the North and South Poles.

Even with such exotic travels under his belt, Baker looks forward to returning to Cleveland and giving the audience “some real surprises and insights.”

“I love my hometown,” he said, “and I want to share a lot of [the life] I’ve experienced.”

Case Western Reserve University is the academic sponsor of the Town Hall of Cleveland speaker series, now in its 83rd season. Through this partnership, faculty, staff and students can receive discounted tickets to the shows ($17.50 for students and $30 for employees). Tickets can be purchased online at townhallseries.org or call 216.241.1919; to receive the discount, simply mention in the comments a connection with CWRU.