Thomas J. Knab never looked for plaudits; instead, they found him: A Grammy Award-winning audio engineer, and the chief information officer in the College of Arts and Sciences, he earned an international reputation for his ear for music and his mind for technology. 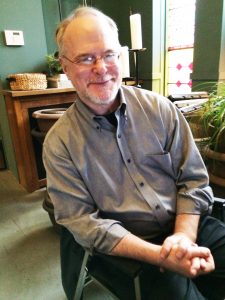 “Cleveland was lucky to have him,” said Ross Duffin, the Fynette H. Kulas Professor of Music and head of the university’s historical performance practice program. “He was a master. Everyone respected Tom—even more so because he was never seeking credit.”

Knab died Sunday. He was 61. He is survived by his wife, Rebecca, their children, Elizabeth and Peter, three sisters and two brothers.

Known as a quiet yet authoritative voice, Knab was so respected professionally that his words carried unusual weight. Friends and colleagues say this trait allowed him to bridge the so-called left brain-right brain divide. 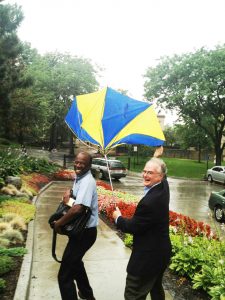 “It takes an exceptionally creative person to create connections across disparate fields, working with all kinds of people,” said Cyrus Taylor, dean of the College of Arts and Sciences and the Albert A. Michelson Professor in Physics. “Tom could speak the language of both the arts and technology.”

As an audio engineer and technician on hundreds of recordings—many released on Telarc International, a classical, jazz and blues label whose very name is shorthand for audio of the highest quality—Knab worked with such artists as Dave Brubeck, André Previn, Liza Minnelli and Doc Severinsen, while also volunteering to record audition tapes of Cleveland-area music students applying to college.

In 2005, Knab shared a Grammy Award for Best Instrumental Soloist Performance (without Orchestra) for the production of Aire Latino, a solo album by guitarist David Russell, and was nominated for many others during his 30-plus years as an audio professional. 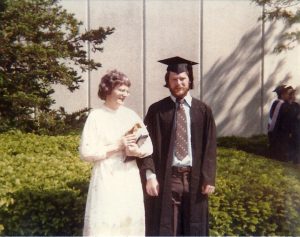 If Knab’s friends or colleagues were aware of his honors, it was not because he told them. With passion for precision, Knab let his work speak on his behalf. Though reserved and soft spoken, he was also known for an understated sense of humor.

“He was one of the nicest people you could ever hope to meet, and an extraordinary gentleman,” Taylor said. “His gentle approach made you comfortable and was essential in helping him achieve so much.”

Joining the College of Arts and Sciences in 2004, Knab created a legacy of accomplishments that married pedagogy with the expanding capabilities of information technology. He traveled the world, making contacts that led to new international partnerships for the college’s students and faculty.

Instrumental in creating the Freedman Center for Digital Scholarship at the Kelvin Smith Library, Knab also provided his perspective during the design of acoustics at the university’s Milton and Tamar Maltz Performing Arts Center at The Temple-Tifereth Israel, among other collaborative achievements across campus.

“Tom could have worked anywhere,” said Stephen Haynesworth, associate dean of the college and associate professor of biology. “He dedicated his talent and curiosity to the university.” 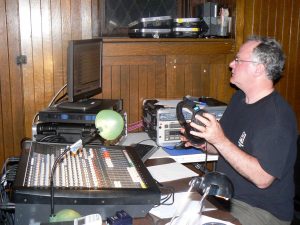 Most at home with headphones on or a guitar in hand, Knab continued to moonlight in audio, producing albums and radio broadcasts for numerous groups, including the entire catalogue of Apollo’s Fire. The Cleveland-based group will dedicate its “Resplendent Purcell” concerts Oct. 6-9 to Knab, who will receive a posthumous credit as engineer for the group’s upcoming Bach: St John Passion release.

“Tom will live on in the beautiful the music he brought to life,” said Taylor. “We all regard him as an indispensable presence.”