The secret’s out: CWRU one of “trendiest” in U.S., says Huffington Post 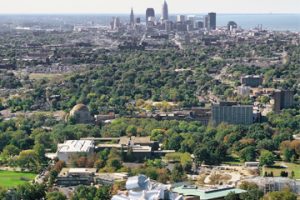 “Given the quality of the faculty, students, facilities and the success of our graduates, we ought to be more well known than we are,” said Rick Bischoff, vice president for enrollment.

The editors at Huffington Post agree. “Ranked the No. 41 best national university by the U.S. News, this school definitely flies under the academic radar,” they wrote. “But with a student body whose top majors include biomedical engineering, there’s no denying that Case kids are smart. Very smart.”

The list cites CWRU’s beautiful campus, the fiber-optic gigabit Ethernet, increased applications and the stellar academic and research opportunities available as reasons why the university “flies under the radar.”

In Bischoff’s view, Case Western Reserve University is trendy because of the quality of academic programs, in- and out-of-classroom experiences and value. “I like Merriam-Webster’s definition [of trendy]: ‘very fashionable,’” he said. “In an era when students and parents are increasingly focused on the value of higher education, what we do at CWRU is very relevant.”

Garnering positive media attention on The Huffington Post, which recently surpassed NYTimes.com in unique visitors and is gaining steam after being purchased by AOL earlier this year, should raise the university’s visibility. “News stories like this are often reprinted, referenced widely and make the rounds on social networking sites,” Bischoff said. “Positive outside opinions will help raise our profile and will likely mean that more students will take a look at us.”